SHANE'S EXCELLENT NEW WORDS: What's the difference between a Gyro and a Shawarma? 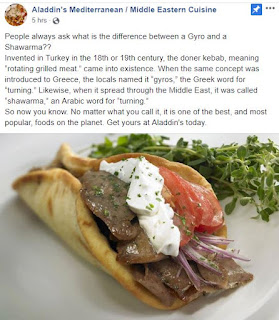 They're all Döner Kebap to me, but Mike Sajaja has a better answer.

People always ask what is the difference between a Gyro and a Shawarma?

Invented in Turkey in the 18th or 19th century, the doner kebab, meaning “rotating grilled meat.” came into existence. When the same concept was introduced to Greece, the locals named it “gyros,” the Greek word for “turning.” Likewise, when it spread through the Middle East, it was called “shawarma,” an Arabic word for “turning.”

So now you know. No matter what you call it, it is one of the best, and most popular, foods on the planet. Get yours at Aladdin's today.

The gyro and the shawarma are two staples of Mediterranean/Middle Eastern cuisine that have gone mainstream in the United States. But even though some gyro-producing companies can make enough meat to crank out 600,000 sandwiches a day, we often don’t inquire about what goes into either of these dishes. However, we at Plated like to uncover every technique and mystery food has to offer, so we’re about to reveal what’s actually wrapped up in that pita.


Earlier in the year, longtime Louisville-based food writer Robin Garr stopped by Aladdin's and filed a favorable report in LEO.

I was still jonesing for labneh, so went for the full plate, an $8 appetizer. The thick, creamy white cheese reminded me of quality whole-milk ricotta in texture, but its yogurt base added a tangy high note to the sweet dairy flavor. It was spooned onto a shallow dish and generously topped with fruity greenish olive oil, with a single black olive for garnish,

I usually say ho-hum hummus, but Aladdin’s version ($7) may rank as the best I have ever had. Remarkably creamy and smooth, it boasts a rich tahini-to-chickpea ratio, and I’m fine with that. Both apps came with plenty of excellent, thick and fluffy pitas.


Finally, in the local chain newspaper, Danielle Grady explains Aladdin's recent addition of a store in the space next door.

NEW ALBANY — Before Mike Sajaja and his family opened Aladdin’s Mediterranean & Middle Eastern Cuisine in New Albany five years ago, many residents in the area hadn’t heard of labneh or foule mudamas or kibbeh.

Now, they know what it is, Mike says with a pinch of pride in his voice. But with that, came a problem: His customers wanted their eastern favorites for themselves. In their cabinets.

Sajaja’s long-time-coming solution? A corner store and juice bar stocked with all the homemade, signature items that Aladdin’s fans love, located right next to the New Albany restaurant in its Underground Station, 37 Bank St., home.

The miniature market opened last week, and the Sajajas are slowly stocking it with new items. The natural juice bar will open within the next couple weeks (if not before, Mike said) ...