Dead Man's Curve has killed, and it will kill again unless our cowardly ruling clique does its job.

Sorry, but we need to be blunt.

We can't possibly be progressive unless the truth about street safety for all users is told aloud, and make no mistake: if the speed-through status quo works for you, that's not progressive at all.

In fact, it's embarrassingly regressive. 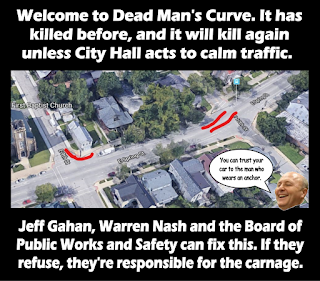 Of course, rule of law would be helpful on widely scattered occasions.

By the way, Gahanesque and Hendersonian bi-partisan political cowardice isn't the only phenomenon causing us to be killed.

The U.S. has been falling behind its peer nations on traffic safety and now life expectancy as well. There's a connection.

Driving is driving us to the grave.

Life expectancy at birth declined steeply in the U.S. in 2015 and 2016, a new British Journal of Medicine study reports — a finding that was attributed partly to the opioid crisis, but also to America’s ongoing traffic violence problem.

In 16 peer nations studied, life expectancy at birth was fairly steady over the same period, but dropped by .2 years in the United States — a decline that is two-and-a-half times worse than the dip in 2012.

The researchers said that about 42 percent of the shortfall is due to the opioid crisis. But the leading cause for declining longevity remains “external factors” such as traffic fatalities, which is blamed for 44 percent of the decline, the study said.

Study author Jessica Ho, a gerontology professor at the University of Southern California, didn’t address the role of traffic accidents in this study, but told Streetsblog that an earlier study found that traffic fatalities accounted for 18 percent of the “life expectancy shortfall” for men under 50, and 16 percent for women in the same age range between 2006 and 2008 compared to similar nations.

So while the opioid addiction grabs headlines, cars have quietly remained a leading killer. In 2015, for example, the U.S. traffic fatality rate jumped 9 percent. And in 2016, it jumped again 5.6 percent, wiping out nearly a decade of improvements. It was the biggest two-year jump in 50 years.

Other Western nations have been making far faster progress on reducing traffic fatalities than the U.S. The Centers for Disease Control sounded the alarm last year, reporting that between 2000 and 2013, traffic deaths per capita in the U.S. dropped at just under half the rate of 19 peer nations. Our death rate per capital is roughly double that of Canada and France ...