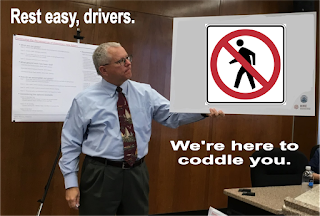 The Green Mouse has learned that in response to Midtown neighborhood resident concerns about speeding and recklessness in the aftermath of skateboarder Matt Brewer's death at the hands of a irresponsible driver, both Mayor Jeff Gahan and Board of Public Works president Warren Nash have commented privately and repeatedly that drivers using the Spring Street corridor cannot possibly be inconvenienced by further traffic calming measures.

I trust the Mouse's multiple sources on this matter. If mayor and mentor disagree, then perhaps they'd like to submit a correction.

Of course, they've both lied repeatedly in the past, and it isn't the first time these two execrable human beings slouch before you, exposed as charlatans.

Isn't it about time that Gahan and Nash went on record, publicly, with these "drivers as permanent privileged class" sentiments? Surely Adam Dickey would slobber servile veneration in response.

In reality, Jeffrey's and Warren's street grid "modernization" sham was a campaign-finance impelled paving project, and now their innate cowardice has turned deadly.

So come right out and say it, gentlemen.

Perhaps HWC Engineering already has quantified an acceptable level of pedestrian, bicyclist, skateboarder and handicapped user attrition before anyone need be concerned about the vital flow of money into the mayoral re-election campaign account.

Just remember that when I asked HWC's Jim Rice about the effectiveness of the street grid reversion, he replied that well, they'd sure kept the heavy trucks moving.

How many bodies are underneath those wheels, Jeffrey, Warren and James -- and how many more before you're able to muster a human response?