PINTS & UNION PORTFOLIO: Anyone up for Tuesday evening beer classes at the pub? 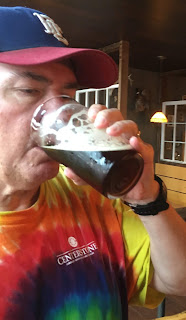 Please excuse a bit of housekeeping.

Because the aim at the Pints&union pub is to be non-denominational insofar as possible given the ill temperament of a planet run amok, I've decided that my writings at NA Confidential pertaining to specific pub business will run under the rubric of "Pints & Union Portfolio," rather than "Beer with a Socialist."

The latter will continue to be used for general beer meanderings not pertaining as much to the pub's mission.

As most readers know by now, I'm the beer guy at Pints&union, but I'm neither an owner nor a bartender (at least yet). I'm caring for the beer, and trying to find ways to promote beer and beer education at the pub.

There'll be guests, tastings, events and the like; just give us time to get settled.

One such idea is Beer Tuesday (or maybe Thursday) Talk and Taste, rather like evening office hours for me with a loose format and the intention of shooting the breeze with beer.

However, I'm also interested in resurrecting a more structured concept from the distant past.

Your continuing beer education: "Here's to Beer" and "Even More to Beer" non-credit IUS courses return in January, March 2012.

With IUS's non-credit program gone, it's time for a beer education rethink.

When the IU Southeast opportunity came to an end, I continued with the NABC program of charitable tasting donations, which was a light variant of the class, but the class itself never was revived.

At Pints&union, there's a second chance, and we're working on it. The class would take place on Tuesday evenings within a specified period of time -- say, an hour or so each night for six weeks. We'd meet upstairs in the room that still needs to be named.

You'd pay a minimal fee each night to cover class samples, and while attendance wouldn't be mandatory, maybe those who made every session would get recognition on the wall, or some such way of reflecting "graduation."

If you're interested, please let me know. Until the details drop into place, here's a throwback from 2010 and my short-lived "Mug Shots" beer column in LEO Weekly. It addresses both the defunct IU Southeast non-credit course and the Public House Monday evening session eventually to be known as "Office Hours."

How do you get to better beer?

Last weekend, the Mug Shot family watched Steven Soderbergh’s “Che,” the 2008 cinematic ode to Che Guevara, and while I know that this will incite the usual round of anguished finger-pointing about my Communist leanings (how unspeakably droll, yet they persist), Cuba never was much of a beer-drinking country, anyway.

Rather, at one juncture in Part One of “Che”, the revolutionary leader realizes that many prospective recruits to the cause can neither read nor write, and he institutes literacy classes as a core component of the 26th of July Movement.

To paraphrase Guevara: Absent literacy, the individual is much more easily misled by the powers that be.

Given that the movement toward better beer is advancing toward a flavor revolution, beer literacy is a vital antidote to the swillocracy’s waning, yet still leaden, anti-competitive grip on the marketplace.

As noted previously, consider Miller Lite’s “triple hop brewing” propaganda campaign. To know nothing about how beer is brewed is to be vulnerable to such assertions, but to be familiar with the brewing process is to know that the practice of adding hops three times in the kettle during the boil is hardly unique.

Beer education is vital to the expansion of beer literacy, and to widening the better beer perimeter. Granted, one may discover better beer without knowledge about brewing methods, beers styles, geography, history and culture, but the greater the absorption of these matters, the greater the possibilities.

Enjoying a flavor in the purest of hedonistic senses is only the starting point. Beer education places the flavor in context and provides the back story, helping to grow the love and to expand the consumer’s savvy. Beer education transforms casual adherents into torchbearers.

I’m determined not to neglect what I view as a personal mandate to educate about beer – all beer, and not just the ones my company makes. My goal always has been to act as fair broker for information about the whole world of better beer, hence these twice-monthly Mug Shots, quarterly contributions to Food & Dining, daily blogging, and a presence on Facebook and Twitter.

Questions? I'll answer them if I’m able, and if not, I'll try to point you in the right direction. The more you know about beer, the better chance you’ll gravitate to better beer and take your place in the ranks of the grassroots revolution. Once in our midst, you won’t be going back to the mundane.

As an update of periodic opportunities for beginning beer education, tonight is the first meeting of my February session of “Here’s to Beer.” It is a course sponsored by the Division of Continuing Education at Indiana University Southeast. The current section is filled, but there’s good news: Another offering arrives in April, with classes taking place from 6:30 to 8:30 p.m. on the 7th, 14th, 21st, and 28th of April, all Wednesdays.

The non-credit course costs $65, the classes take place at NABC’s Pizzeria & Public House, and the objective is simple:

“Once upon a time, beer was just beer. No longer. Beginning with an overview of the brewing process and the history of beer, we'll learn how to distinguish Pale Ale from Imperial Stout through words and samples.”

On a more advanced level, I’ll soon be conducting weekly beer seminars at the Public House, beginning on Monday, February 8. Each “Office Hour with the Publican” will start at 6:30 p.m., and have the format of a participatory skull session with samples.

I project it as freewheeling, with each week’s hour self-contained, as opposed to the more structured and cumulative approach embodied by Here’s to Beer. There’ll be a modest sampling charge for participants, and the opportunity to eat and drink before, during and after the session.

Some topics will be announced, while at other times, the theme of the night will be determined on the fly. Examples:

Expect occasional guest speakers and impromptu entertainment. We’ll learn, have fun, and then see where the concept goes after a couple of months in action.
Posted by The New Albanian at 8/20/2018 10:37:00 AM