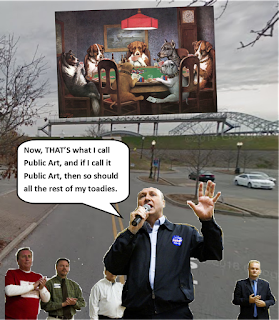 The Tom May Content Multiplier's "letters to the editor" section has become a shadow of its former entertaining self, and it's not entirely the fault of our chain newspaper's enduring absentee ownership.

These days, people barely capable of communicating in writing still manage to inflict their views on the general populace via various social media platforms, accompanied by memes someone else conjured. A reincarnated H.L. Mencken doubtless would observe that American civilization is regressing quite markedly toward reclaiming grunts and groans from its simian forebearers.

Like Greg Phipps, we've met the enemy, and he is us.

Speaking of animals, it seems the presence of dogs at New Albany's farmers market has single-handedly rejuvenated the newspaper's letters section.

I love going to the Farmers Market on Saturday morning and was there the morning of July 28. However, this morning was not a pleasant visit as there were more dogs than humans. In fact, you could barely walk through because of so many dogs and I almost tripped over a small dog. Who would be liable for an accident? I like dogs in their place and this is not their place. This is a food market not a dog market.


No one goes to the farmers market any more -- far too many people are there -- and it would seem that the balance of vendors long since has tilted to merchandise, arts and crafts rather than food, but I digress.

Farmers market is no place for animals

Last week at the Farmers Market I had just entered the food area off Market Street, which was very crowded. The next thing I know a dog licked my right hand and I didn’t even SEE the animal. My first thought was: They should not allow animals at this public place! I’m leery of dogs and this scared me. And now I see this article which has prompted me to write.

Also, animals around food that humans will be purchasing and eating does not sound healthy to me.

I think it would be much cleaner with just humans at the Farmers Market.


"Syncopated Germophobe" sounds like the name of a rock band, not jazz.

germ·o·phobe
ˈjərməˌfōb
noun
A person with an extreme fear of germs and an obsession with cleanliness.


Let's have a closer look at the saxophonist's link. I'm reminded of Frank Zappa's immortal album, Weasels Ripped My Flesh.

Doctors have been forced to amputate a man's legs and parts of his hands after he suffered sepsis believed to be caused by being licked by a dog ...

... A representative for the New York Animal Hospital told The Independent that it’s "extremely rare" for humans to become ill after contact with Capnocytophaga canimorsus, which was found in Mr Manteufel’s blood. In rare instances, the bacteria — which can be found in dog and cat saliva — may cause infections when it comes in contact with an open wound or burn, while the majority of Capnocytophaga canimorsus-related illnesses occur through dog bites.

In fact, there have only reportedly been 500 cases of sepsis caused by Capnocytophaga canimorsus without a dog bite being found in the US and Canada since 1976.


Obviously it's no laughing matter to contract sepsis from a dog's lick, but on the other hand, probably more than 500 pianos have landed on American sidewalk strollers since 1976.

No smoking, no animals; Aebersold's "anti-" range pleasingly grows. My own pet peeve is Puritanism, which I think should be banned from all public gatherings like the farmers market, city council meetings and DNA-sponsored events.

Mencken's definition remains the standard in the English language.

“Puritanism: The haunting fear that someone, somewhere, may be happy.”


However, lest the jazzman has forgotten, at times the shoe occupies the other foot, assuming it hasn't been amputated.

During the Cold War, jazz was still banned in some Eastern European countries for being subversive and decadent. Well into the 1980s, the underground clubs where it was performed in these countries provided meeting places for political dissidents.


What if no anchor-bedecked city officials were allowed at the farmers market? Then we'd be getting somewhere. Keep the dogs -- just remove the bottom-feeders.
Posted by The New Albanian at 8/08/2018 08:13:00 AM

Mr. Aebersold is a national treasure. I was at the market that day at the time he arrived, I had just left Louisville Elderberry; it was very crowded and there were several dogs, one lady had 3 dogs on leashes with her. I agree it would be best to not have dogs at the market. As a cat lover, I may be biased however also I do not bring cats there and neither does anyone else as far as I know. Service dogs would need to be exempted and it is important to remember service dogs are trained and on duty. I do not think a service dog would lick Mr. Aebersold or any other patron. Just because you are a germaphobe doesn't mean that germs are not out to get you.

Not your best work, my friend.

I don't have a dog in this fight (I'm a cat person), so I'd simply recommend that those disturbed by canines at the FM should let market management know about it.

I would also suggest that those not offended by the dogs let management know.