Ladies and gentlemen, allow me to rant in a unique way about the jail tax. 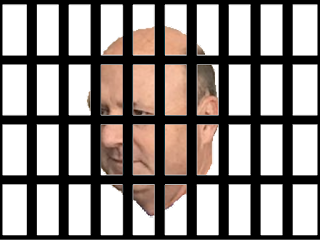 No one from the public attended the second reading and final vote for the tax Wednesday, although (county council president Brad) Striegel said he heard from some constituents who are against it.
-- from the article in the newspaper

For me, it comes down to this: if the primary aim of the criminal justice system is to incarcerate -- and America tends to incarcerate an absurd percentage of its own people -- then it's going to be necessary to constantly build and rebuild jails.

Personally, I find it revolting. So much of this has to do with drug abuse, which is an illness, and we're perpetually unwilling as a nation to examine the fundamentals of addiction and treat the disease rather than its symptoms.

Kindly note that as I'm writing these words, the 1% has amassed a few trillion dollars more, none of which is being tithed toward jails, disease or much of anything else apart from greed.

Sounds like a disease to me. Is there a vaccine?

In terms of coping with reality in the way we as a people seem to favor it, then yes, Sheriff Loop's plan for jail renovation is far less expensive then building fresh, and the tax enacted this week is relatively low.

Those county council members carrying the ball were doing so pragmatically. No one ever said it was going to be easy trying to square diametrically opposed conditions, and my guess is they understand the electoral implications, although to repeat, not one member of the public bothered to show up and speak.

Politics is about power, and in political terms, Adam Dickey predictably has released his bots-by-DNC-template attacks, with Republicans being savaged for raising taxes. Seems there might be as many fault lines in the local GOP as among Squire Adam's DemoDisneyDixiecrats, as some Republicans are joining in this fusillade on social media.

Others expressing support for the jail tax have written that they predicated their approval on efforts to cut fat before approving the tax, with these not being considered.

Just a thought, but all these Republicans might also be asking urban Democrats to explain a municipal budget that has doubled since Jeff Gahan took office, or helping to unravel the vast extent of mayoral influence peddling, or even taking to the airwaves to question the Gahan ruling clique's cozy arrangement to procure a job for councilman Matt Nash.

It would be mighty helpful in explicating Gahan's myriad ethical shortcomings if the occasional sign of a pulse dimly emanated from the right, and not only the left, where as the rare social democrat (lower case, please) in the room, I tire of waging a one-front war against Team Gahan's larcenous stupidity.

Here's the script. No charge; you can buy me a beer some time. Instructions for use: launch an offensive against Democratic Party corruption first, illustrating that Gahan's homegrown Anchor Nostra is costing each of us quite a lot more than $100 each year, and then take your chances with the jail tax response.

A purely sadistic week in New Gahania, and even more tales from Corruption Junction.


Alas, as one Republican sadly explained to me:

It's because our presumptive mayoral candidate is low energy and is surrounded by a bunch of low-lifes who can’t call the Democrats out because they do exactly the same thing.


Can't we all just get along and agree to topple the despot?

But I digress. As it pertains to the jail tax, what just about everyone on both sides of the aisle misses is the basic first-causes point, this being whether we need to incarcerate so many persons when numerous other strategies to address such behavior exist.

We're accepting the grassroots muck, then arguing about how best to keep the slime off our clothing. Down here in the mud flats by the river, it's quite likely a futile strategy.

Move will generate $4.5 million a year

NEW ALBANY — The Floyd County Council raised taxes in 1992 to pay for a new jail. On Wednesday night, a different council voted to raise taxes to renovate that same jail.

By a 4-3 vote the council approved a new Correctional Rehabilitation Facilities ordinance that calls for a .002 percent payroll tax on Floyd County residents. The new tax will generate around $4.5 million a year to be used on jail expenses including staffing and construction costs associated with the $15 million renovation plan that was recently approved.

"It's hard to do, but it's the right thing to do," council Vice President Denise Konkle said after the vote. Konkle, Lana Aebersold, Dale Bagshaw and Leslie Knable voted in favor of the tax, while Brad Striegel, Tom Pickett and Cam Wright voted against ...

"This can help pay the bond and other costs for the jail," he said. "That is why we did it."


And a day earlier:

By a 5-2 vote, an ordinance to create a .002 jail tax rate passed on first reading. The final vote will take place Wednesday at 6 p.m. at the Pine View Government Center since the vote did not pass by unanimous consent on first reading.

The new tax will generate around $4.5 million a year to be used on jail expenses including construction costs associated with the $15 million renovation plan that was recently approved. For residents making $50,000 a year, the new jail payroll tax will amount to around $100 a year, according to Auditor Scott Clark. The tax would kick in Oct. 1, 2018.

Lana Aebersold, Dale Bagshaw, Cam Wright, Leslie Knable and Denise Konkle voted in favor of the jail tax in the first reading, while Brad Striegel and Tom Pickett voted against. Only a majority vote of the council is needed Wednesday night for the tax to be approved.

"I've been struggling with this," Bagshaw said. "But I looked at this [needs] through the prism of public safety and infrastructure. This meets both in my opinion."

While no one wants to see a tax increase, Konkle said residents will be getting "a bang for their buck," with this ordinance. She said for just a minimal amount the jail will be renovated and be able to hold 100 more inmates, which will keep the county in compliance. She said it is also needed to shore up the budget.

"It may upset some people but the levy has not increased significantly enough to keep up with the growth in the community," Konkle said.