AMIBA on immigration: "In fact, working people benefit from the jobs and economic opportunities provided by immigrants." 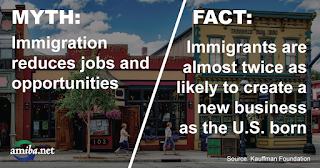 The article is from 2017, and was published at American Independent Business Alliance (AMIBA). I think it underscores the possibility of our independent local business community taking a principled stance on immigration.

Scapegoating of Immigrants Is Dangerous, Inaccurate, by Drew Callaghan

... In addition to contributing positively to our national economy, immigrants play a crucial role in stabilizing and revitalizing struggling communities. For decades, rural areas and post-industrial cities have grappled with debilitating out-migration. Many of the communities effectively weathering these upheavals have an influx of immigrants to thank.

Immigrants are pumping new life into communities like Akron, Ohio and Storm Lake, Iowa which, unlike nearby towns, recovered from successive economic shocks by embracing immigrants who fill essential jobs, buy homes, and do the thing elemental to a thriving economy: start businesses and create jobs.

Trump and other immigration hawks have proposed a new merit-based system that would invite only the “best and brightest” to America. Humanitarian concerns aside, reducing the number of immigrants with low skills and education may seem like smart economic policy. Again, the data disagree. Immigrants with fewer skills and less education actually create new businesses at a higher rate. Counterintuitive, sure, but some observers suggest the characteristics this population embodies – namely risk-tolerance, perseverance and problem-solving skills – ideally suit them for entrepreneurship.

Even immigrants who don’t start businesses have, at worst, a neutral effect on earnings. An analysis by the libertarian Cato Institute found immigration had no significant impact on the wages of American workers. And, although poor immigrants may tap into social services initially, Cato found they use public benefits at a lower rate than poor native-born citizens over the long term.

Furthermore, the idea that immigrants – particularly refugees – lead to more crime is a myth ...