BEER WITH A SOCIALIST: In consideration of Falls City Classic Pilsner, on tap now at Pints&union. 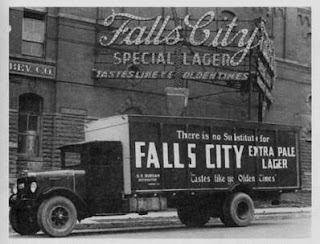 It's always best to start at the beginning, and so it might help to know that the term "Falls City" predates those beers bearing its name, as Thomas Jefferson himself explains.

The Ohio is the most beautiful river on earth. Its current gentle, waters clear, and bosom smooth and unbroken by rocks and rapids, a single instance only excepted.


This single instance of interruption during 981 miles of passage to the Mississippi occurs where Louisville came to be. On the Indiana side, a state park marks the spot.

The Falls of the Ohio ... was the only navigational barrier on the river in earlier times. The falls were a series of rapids formed by the relatively recent erosion of the Ohio River operating on 386-million-year-old Devonian hard limestone rock shelves. Louisville, Kentucky, and the associated Indiana communities—Jeffersonville, Clarksville, and New Albany—all owe their existence as communities to the falls, as the navigational obstacles the falls presented meant that late-18th-century and early- to late-19th-century river traffic could benefit from local expertise in navigating the 26-foot (7.9 m) drop made by the river over a distance of two miles (3 km).


It's the Falls City as the sobriquet applies to Louisville alone, and Falls Cities in the sense of the bigger Kentucky city taken together with the three smaller ones in Indiana. It was inevitable that beer would become involved with the hard work of portage, or the act of conveying boats and/or their cargoes between navigable stretches of the river.

Falls City Brewing Co. was formed in 1905 by a collection of saloon owners and grocers who were in protest of the Central Consumers Company alliance formed by several larger Louisville brewers, which had essentially monopolized beer sales in the city. This group of plucky businessmen combined forces and built a 75,000-barrel brewery at Thirtieth Street and West Broadway downtown, next to Southern Railroad.

It should be noted that a number of smaller operations brewed beer under the name Falls City well ahead of this brewery’s launch; as breweries opened, closed, reopened and changed hands in the 1800s, a number of names came and went.

We've had a good reception at Pints&union for Falls City Classic Pilsner, and in a moment, I'll throw it over to Kevin Gibson to learn why this beer has reappeared in metro Louisville and it being poured at places like ours.

In the patois of the present, Falls City Classic Pilsner might be described as a "throwback" or "retro" beer, although perhaps the word "reincarnation" better describes the phenomenon of your grandfather's beer coming back to life for new generation of beer drinkers.

Before returning to the City story, let's rewind to September of 2008 for background on how beers like Pabst, Stroh's and Hamm's came to emulate Lazerus and be with us all over again.

RETRO BEER, by Don Russell (All About Beer)

... “It takes you back to a happy time, a time of less-hectic, calmer life,” said Scott Baver, whose Legacy Brewing Co. has begun brewing its own retro, Reading Premium.

Reading gets its name from the Berks County, PA, town 60 miles west of Philadelphia, where Legacy has been making full-flavored beers, including Hedonism and Midnight Wit, for the past five years. Though he sells plenty of those craft brands throughout the mid-Atlantic, Baver said he’s always been troubled by a common refrain from bar owners:

“Howcum you guys can’t make a ‘regular’ beer that the average person can drink?”

Instead of lecturing the bartender on the wonders of handcrafted ales, Baver responded by reviving the old Reading brand—a local favorite until it shutdown in the mid-1970s. “It was a no-brainer,” he said. “Ninety percent of the bars in the area still had all the Reading Premium point-of-sales material hanging up.”

Baver knew locals would go nuts for the beer. In less than a year, it was out-selling Legacy in Berks County. “I keep meeting people who tell me, ‘My grandpop used to drink it—I’ll drink one for him.’ Then, after they taste it, they find out the beer is pretty good.”


I hadn't planned on putting Falls City Classic Pilsner on tap at Pints&union, and to be honest, it had escaped my scrutiny apart from a wee taste at the Fest of Ale back in June. Then by sheer chance I ran into Travis (our local rep) while shopping at Kroger, and after chatting with him, decided to give it a shot, but not before dropping into Bridge Liquors to pick up a six-pack of cans.

For research purposes only, of course.

Here's Kevin with the background. I'm not going to lie to you; to me, part of the charm of Falls City Classic Pilsner is its lower price point, but if the beer didn't taste good, this wouldn't be enough to persuade me. It's a solid and tasty lager, and we'll give it a good, long run on draft to see if a following develops.

... A first taste of the beer reveals that brewer Cameron Finnis achieved exactly what Falls City set out to do: create a clean, basic, easy-drinking American pilsner that should appeal to a wide variety of palates.

For those put off by the big flavors of craft beer, this one will be an easy drinker.