The Root coworking space approaches completion at 110 E. Market, next door to Pints&union. 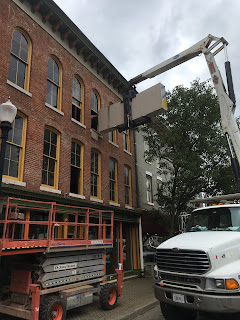 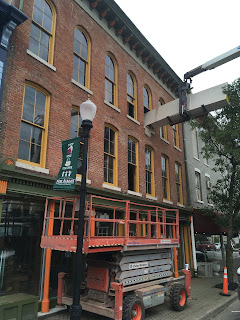 About a month ago, Steve Resch's crew made the final big push to get the Pints&union buildout finished so Joe Phillips' team could open the pub. Since then the heavy lifting of renovation has shifted next door to do the same for The Root, which now has entered the stretch drive toward completion.

Plant the seed, watch it grow. Start digging in your roots.

The Root provides a grounded co-work space to help your business flourish by connecting unconnected people in a versatile environment. Our vision is to successfully serve, connect, and empower professionals throughout our community, allowing for innovation and discovery in a serene, creative environment.


As with the pub, the planning period began more than a year ago.

NEW ALBANY — Mark Morrissey didn’t know what a coworking space was a few years ago. His daughter, Brigid Morrissey, had to explain it to him.

Now, the two locals are opening one in downtown New Albany — and they’re trying to educate others on what it is and why they believe it’s such a good idea.

“I’ve learned a lot about it,” Mark said. “So I’m confident that anybody who knows nothing about it will know as much as I do eventually.”

At the Morrissey’s 110 E. Market St. coworking space, called the Root, independent workers, such as freelancers and building-less business owners, will be able to work away from home in comfort and collaborate with other members ...


I'm delighted to get to know the Morrisseys, and to me, there's a great deal of potential symmetry between The Roots and Pints&union. Very soon, we'll find out.