"As long as we continue to fail to question the world economic system, our conditions will only worsen." 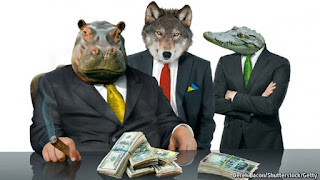 Because, you see, it's best to follow the money and get to the heart of the matter.

If the Economy is So Good, Why are Wages Flat?, by Pete Dolack (CounterPunch)

We are supposedly seven years into a “recovery” from the global economic collapse that commenced in 2008. The latest evidence offered to promote this oft-peddled mantra is that U.S. gross domestic product showed a strong uptick for the second quarter of 2018, an annualized rate of 4.1 percent, nearly double that of the first quarter.

Coupled with the ongoing decline in unemployment (although standard unemployment rates greatly underestimate the true rate of employment), orthodox economists, conservative propagandists and apologists for the Trump administration would have use believe happy days are here again.

So why aren’t our wages increasing?


Leap to the conclusion.

These reports, although doing a fine job of quantifying how screwed we are, tend to conclude with pleas for better government policies. Surely there should be. But although positive reforms would be welcome, the problem is that reforms can, and are, taken away when mobilizations fade. The hyper-competitive nature of capitalism, under which our labor is a commodity, can’t be altered; at best through massive effort reforms can be achieved until the next wave of attacks commences. As long as we continue to fail to question the world economic system, our conditions will only worsen.