BEER WITH A SOCIALIST: An accumulated thirst -- or, lots of kegs floated at Pints&union. 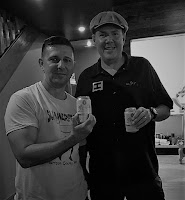 I am somewhat flabbergasted by the tally, but happily so.

After four "official" business days preceded by two "soft" evenings, something like 800 pints of draft beer have been consumed at Pints&union, including two full kegs of Fuller's London Pride -- and only one of the other blown kegs was an IPA (Bell's Two Hearted).

That's 100 pints of IPA (a very good IPA, I might add) and 700 of the other styles. Bottles and cans are moving at a nice clip, too. Yesterday an old friend in the restaurant business took a look at the beer list.

"This is great. There's something here for everyone."

I’m actually really impressed by those tap choices. Solid but not intimidating beers. I’ll definitely be grabbing a Fuller’s or an Urquell.


It's far too early to judge, and as Tom Hanks might have noted in an alternate universe, there's no gloating in the beer business. Still, it's gratifying to play a role in a plan finally coming to fruition. On Sunday afternoon, Joe Phillips posted at the Pints&union Fb page.

I saw all walks of life, many different age groups, strangers becoming friends. That's what a public house is for. No more blaming, no left or right, no more terms like "Boomers" or "Millennial's"; we are all in this together. Thank you for showing up and meeting someone new and getting back to what matters, and that's "us" as a whole. Thank you so much for a great first week, we look forward to seeing you again soon.


Pints&union will reopen on Tuesday at 4:00 p.m. Business hours next week are easy to remember: 4:00 p.m. to to 2:00 a.m., Tuesday through Saturday. Monday is our Ruhetag -- the "quiet" or "rest" day (translation: closed on Monday. Sunday hours are coming fairly soon.

As the kegs started popping on Saturday night, I was reminded of a hilarious 1950’s-era Australian song that I first heard performed by the Dubliners with heavily bearded and gravelly-voiced Ronnie Drew singing the lead. The song is based on a true story and the tale is told here: The Original "Pub with No Beer."


It's lonesome away from your kindred and all
By the camp fire at night where the wild dingoes call,
But there's nothing so lonesome so morbid or drear
Than to stand in a bar of a pub with no beer.

Now the publican's anxious for the quota to come
There's a far away lock on the face of the bum
The maid's gone all cranky and the cook's acting queer
What a terrible place is a pub with no beer.

Then the stock-man rides up with his dry dusty throat
He breasts up to the bar, pulls a wat from his coat,
But the smile on his face quickly turns to a sneer,
When the bar man said sadly the pub's got no beer.

Ther's a dog on the 'randa-h for his master he waits
But the boss is inside drinking wine with his mates
He hurries for cover and cringes in fear
It's no place for a dog round a pub with no beer.

Old Billy the blacksmith first time in his life
Has gone home cold sober to his darling wife,
He walks in the kitchen, she says you're early me dear,
But he breaks down and tells her the pub's got no beer.
Posted by The New Albanian at 8/05/2018 05:06:00 PM