BEER WITH A SOCIALIST: No absinthe-barrel-aged IPAs, please. Imperial Stout? Let me think about that one.

Someone in the Netherlands already went and did absinthe beer, not barrel-aged (some things should remain far removed from scheming human hands), but with barley, wheat and an herbal extract.

Just what I was craving on a scorching August day. 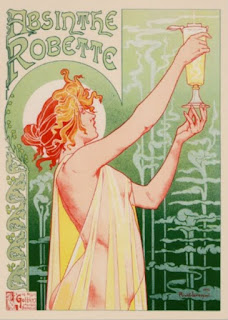 The graphic is a Mucha, and appropriately, the last time I drank absinthe the spirit was in the Czech Republic, probably in 2004. Once upon a time at the NABC web site FAQ, there was this.

My grandfather told me that bock beer …

He meant well, but it isn’t true. Bock beers do not come about because of the dark residue of once-yearly spring cleaning. Also, the beer you had in Prague that was identified as “12” referred to gravity, not the alcohol content (and the fact that it made you so drunk probably owed to the accompanying and injudicious use of absinthe). Darkness is not an indicator of strength, and ale won’t give you a headache unless you drink far too much of it – same goes for lager.


Joe mentioned the other day that we're eventually to have absinthe at Pints&union. While I've come to enjoy licorice-flavored alcohol -- anise and ouzo spring to mind -- absinthe probably is something I can avoid misusing.

Then there's Mezcal. Best keep that one under lock and key, Joe. In the meantime, here's a fine tutorial about absinthe and how to drink it.

How to Drink Absinthe and Live to Tell the Tale, by J Fergus (The Manual)

Absinthe — sometimes called the “Green Fairy” because of the alleged hallucinatory properties — is perhaps one of the most misunderstood spirits out there. This isn’t just because of the whole “wormwood makes you see things” thing, but also because (unlike your everyday whiskey), to get the most out of absinthe, you can’t just pour it into a glass and go. (Well, you could just pour it into a glass and drink it, but with the average proof of absinthes being over 50 percent ABV, it isn’t advisable.)

For some expert guidance, we’ve enlisted the help of Matt Johnson, owner of The Secret Society, a lounge, ballroom, and recording studio in Portland, Oregon, that’s renowned for its absinthe collection.