As the Bored of Works dithers over safe streets, a reprise: "On the crass exploitation and politicization of tragedy." 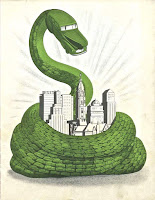 Politics is about power. It's about who has power, who gets to use power, and who gets power poured down their gullets like cheap champagne. Unsurprisingly, those who have power often hoard it. They'd rather keep power for themselves, and the smaller the pond, the greater the urge to strut one's proportionately minor power as a big fish poseur.

But let's leave Warren Nash out of this, shall we?

When Chloe Allen was killed in 2016 by a driver as she tried to cross the street, I was accused by Jeff Gahan's anonymous social media bot of politicizing tragedy, and replied with this column, one far too easily transferable to the present, in the aftermath of Matt Brewer's death last week.

I'm happy to announce that almost seven years into his tenure as my city councilman, Greg Phipps may at last have grasped the nature of the threat. It's probably too late, but there's always time to learn. 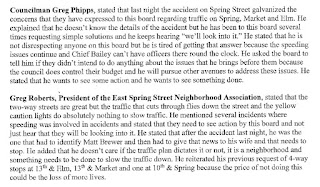 In plain text: "(Phipps) asked the board to tell him if they didn't intend to do anything about the issues that he brings before them because the council does control their budget and he will pursue other avenues to address these issues."

Phipps's thoughts stand in vivid contrast to the robotic bureaucratese of Gahan's star appointees, as ever unable to muster a human response from behind the circled wagons.

ON THE AVENUES: On the crass exploitation and politicization of tragedy.

One of William Shakespeare’s most famous plays is The Tragedy of Julius Caesar. A spoiler alert is unnecessary, for the title character’s assassination at the hands of supposedly patriotic conspirators is central to the narrative.

Friends, Romans, countrymen, lend me your ears;
I come to bury Caesar, not to praise him.
The evil that men do lives after them;
The good is oft interred with their bones;
So let it be with Caesar. The noble Brutus
Hath told you Caesar was ambitious:
If it were so, it was a grievous fault;
And grievously hath Caesar answer'd it.
Here, under leave of Brutus and the rest, —
For Brutus is an honorable man;
So are they all, all honorable men, —
Come I to speak in Caesar's funeral.
He was my friend, faithful and just to me:
But Brutus says he was ambitious;
And Brutus is an honorable man.


By the time Antony has finished “burying” Caesar, the mood of the crowd has shifted ominously, and the assassins have become the hunted. It is rumored that in an early draft of the play, Shakespeare penned these words for a fleeing Brutus:


The roots of “tragedy” in the modern sense extend to ancient Greece.

Tragedy (from the Greek: τραγῳδία, tragōidia[a]) is a form of drama based on human suffering that invokes an accompanying catharsis or pleasure in audiences. While many cultures have developed forms that provoke this paradoxical response, the term tragedy often refers to a specific tradition of drama that has played a unique and important role historically in the self-definition of Western civilization. That tradition has been multiple and discontinuous, yet the term has often been used to invoke a powerful effect of cultural identity and historical continuity …


In everyday terms, we use the word “tragedy” as a sort of catch-all, one describing unexpected, bad and destructive situations or events, which often involve someone’s death.

A tragic occurrence can be a simple twist of fate, or echoing the ancient Greek point of view, the victim may have suffered ill tidings owing to an inner flaw or moral weakness, as Anthony Weiner might well attest.

Moreover, we recognize the potentially collective nature of tragedy, in the sense that our flaws and weaknesses as a society can result in disasters, or abet them.

In 1988, tens of thousands died as the result of an earthquake in then-Soviet Armenia, often as the result of shoddy construction techniques and lack of preparedness. Of course, the earthquake itself was unpreventable, but not preparing for the eventuality of earthquakes in a region noted for seismic activity is a human variable. To an appreciable extent, Armenians tragically died because of choices made by a network of other persons, not Mother Nature.

The debate will continue as to the concept of collective responsibility in totalitarian systems, but we needn’t restrict our gaze to dictatorships.

In America, ostensibly a nation founded on rule of law and devoted to individual liberty, the period following the Civil War, from 1865 to the present, has been marred by tragedy in the specific form of discrimination, lynching and myriad affiliated acts of purposeful violence directed against African-Americans by dominant white supremacist culture.

These acts are neither random nor senseless. Rather, they occur within the framework of American politics, as opposed to inexplicable spins of a cosmic wheel.

“Politics at its most basic isn't a Princeton debating society. It's a desperate battle over who gets what.”


Taibbi’s reckoning matches what my poli-sci instructor said on the first day of class at IU Southeast in 1978, paraphrased: Politics is about power – what power is, how it is used, who gets to have it, and who doesn’t.

This is why Dr. Martin Luther King did not hesitate to crassly exploit tragedy for political purposes, as in 1963, when members of the Ku Klux Klan planted sticks of dynamite beneath church steps in Birmingham, Alabama and killed four African-American girls.


When Dr. King was assassinated in 1968, his death was crassly exploited for political purposes. The cycle continued. In 1998, there was yet another tragedy, this time in Wyoming.

On October 7, 1998, Matthew Shepard, a 21-year-old student at the University of Wyoming, was brutally attacked and tied to a fence in a field outside of Laramie, Wyo. and left to die. On October 12, Matt succumbed to his wounds in a hospital in Fort Collins, Colorado.

The horrific killing of Matthew Shepard in 1998 is widely seen as one of the worst anti-gay hate crimes in American history. Matthew was beaten by two assailants, Aaron McKinney and Russell Henderson. They pistol whipped him with a gun then tied him to a fence in freezing conditions and set fire to him before leaving him to die.

The attack became a cause célèbre: it precipitated a national backlash against hyper-macho culture and tacit tolerance of homophobia. As a result of Matthew’s death, many good things have happened for the gay community.


This backlash following Shepard’s murder was knowingly spurred and intentionally politicized by LGBT activists, civil rights advocates, world famous celebrities, but also ordinary folks inhabiting a table at Denny’s. It was crass, exploitative and fully justified. I supported it then, and I do now.

Perhaps then we’re all malcontents, each and every one of us, crassly exploiting tragedy for political purposes, whether it’s Marc Antony, the grieving Armenians pointing fingers at the Kremlin, Dr. King, human rights proponents memorializing Shepard – or a citizen like Lori Kay Sympson, who doesn’t want you to forget that her friend Chloe Allen was killed trying to cross a dangerous street in New Albany, where streets are kept dangerous due to crass exploitation – that’s right, for political purposes.

Politics is power. For a prevaricating politician like Greg Phipps to selectively deny the efficacy of this statement by tarring others as malcontents is a tragedy in itself, and a misreading of history eligible for crass exploitation by those of us, malcontented or otherwise, who apparently understand his elected position – and his past – far better than he does.
Posted by The New Albanian at 8/14/2018 07:36:00 AM