BEER WITH A SOCIALIST Exploding beer cans? If I want to risk injury, I'll try to make it across a New Albany street on foot.

Absolutely no disrespect to my bar-none favorite liquor store, just puzzlement at the decadence of the peak craft beer marketplace. 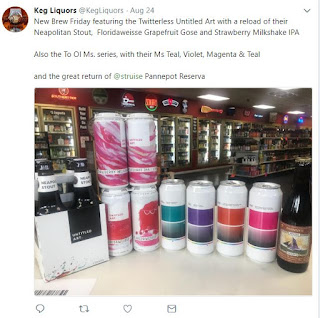 I'll have one of the gimmick-suppression beers on the right. Urbain Coutteau is a fine guy, indeed.

The irony in all this is that a few days before the advent of Neopolitan Grapefruit Milkshake, I'd dropped by The Keg to purchase a few German-brewed Oktoberfest bottles for a vital personal sampling, and was told a case of 450 North had just detonated in the storeroom.

Lest there be any misunderstanding, allow me to paraphrase an old saw: I may be entirely befuddled by what you're brewing, but I'll fight to the point of unconsciousness in support of your right to brew it.

At the same time, count me among those who can't come to grips with the notion of craft beer as potential can bombs. In response to this cognitive dissonance, I ducked into the wayback machine, armed with my tasty Hacker Pschorr, Paulaner and Hofbrau seasonal lagers, comparing their malty nuances and calculating which among them is best suited to induce the quaffing of another mug without recourse to check-ins, on-line ratings and narcissistic selfies.

In short, my own snug, tasty, dependable counter-revolution -- sans flying debris. The wonderful Bryan Roth takes it from here.

Think the process to go from grain to glass with an ingredient-laden Pastry Stout or lacto-fruit milkshake IPA is strenuous? For some breweries, adding a phone call to their lawyer may be a new, necessary step, too. At least, that's the advice from one attorney regarding a controversial new trend in beer.

“I’d say you definitely need to seek basic legal counsel just to verify what verbiage should be put on a can,” says Candace Moon, a partner and member of the Corporate Department at Dinsmore & Shohl LLP. “Even just to share how things are communicated, because a second set of eyes could be meaningful.”

Such is the awkward reality—and surprising conundrum—of who should be responsible for an exploding can of beer. For all the challenges in today’s beer industry, it’s a rather strange and new one, spurred by discussions not around the quality of a product, but its ability to harm the consumer ...