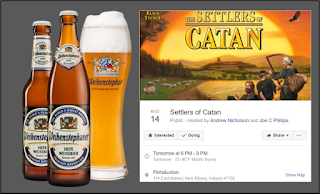 To be perfectly honest, I've yet to make the acquaintance of The Settlers of Catan, yet I'm undeterred. If I were asked to select a beer to match the above image, it would be Weihenstephaner Hefeweissbier.

Our golden-yellow wheat beer, with its fine-poured white foam, smells of cloves and impresses consumers with its refreshing banana flavor. It is full bodied with a smooth yeast taste. To be enjoyed at any time, this beer goes excellently with fish, seafood, spicy cheeses and pairs especially well with the traditional Bavarian veal sausage. Hefeweissbier brewed according to our centuries-old brewing tradition on the Weihenstephan hill.


If you're wondering where I'm headed with this, be aware of two events taking place at Pints&union (114 E. Market) on Tuesday evening.

Beer Tuesday Talk & Taste
The plan all along has been for me to keep regular "office hours" at Pints&union, although I'm not calling them Office Hours as such, since this title refers to my former Monday tasting gig at the Public House.

This weekly event is strictly informal, and you need not be present at any precise time, just at any point within the window. It's not exactly a class, and there'll be no tests. However, there'll be a beer of the week; purchase one downstairs, bring the beer upstairs, and we'll talk it over.

The conversation might lead somewhere, or not much of anywhere at all. However, it's your chance to learn about beer styles and ask me questions.

As you may have guessed already, this week's featured beer is Weihenstephaner Hefeweissbier. Currently it's a rotating draft selection, and will remain on tap for at least another month.

Want to know more? Come see me on Tuesday night.