Reconstruction: "Democracy was subverted, and the human toll, however inexact, was enormous." Bye bye, Castleman and Prentice. 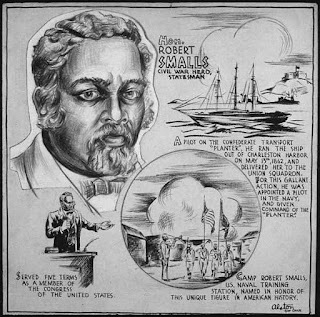 There can be little doubt that Southern whites engaged in post-war racial terrorism, effectively thwarting Reconstruction. I was unaware of the life story of Robert Smalls, and this is a welcome corrective.

... Fifty-three thousand dead is a staggering number—more than all the dead, wounded and missing at the Battle of Gettysburg. Even spread over the 30 years that had elapsed since Appomattox, that would be an average of 1,766 murders each year, or almost five each day, across the 11 former Confederate states.

When I first read Smalls’ speech while researching political violence in the years after the Civil War, I was stunned. Most estimates of postwar killings of African-Americans amount to about 4,000 public lynchings committed between 1877 and 1968. But what about those who were assassinated or disappeared before 1877, the year Reconstruction began to decline? How did Smalls arrive at that figure? Perhaps he simply invented it to capture the nation’s attention or to appeal to the sympathy of moderate Southern whites. But this figure, like others in his oration, was precise. He could have said “about fifty thousand” or even “more than fifty thousand,” but he didn’t. Was his number even plausible? Could it be verified? As far as I could tell, no historian had tried.

The answer matters because it captures a shifting understanding of what brought the nation’s first meaningful campaign for racial equality to a halt. Too often, the central question about the postwar period is why Reconstruction failed, which implies that the process itself was flawed in ways that contributed to its own demise. But Smalls’ death toll, if even close to accurate, adds substantial weight to the idea that Reconstruction was overthrown—by unremitting clandestine violence ...