If you want to know how Deaf Gahan purposefully botched the Speck plan for walkable streets, read this article. Hint: HWC dunnit. 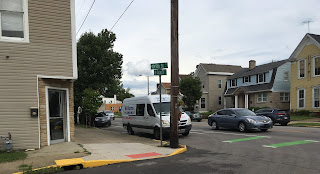 Elsewhere today: Non-learning curve: This ON THE AVENUES column repeat reveals that since 2011, we've been discussing the safety hazards on Spring Street between 10th and 9th. Too bad City Hall is deaf.

Jeff Speck conducted a street grid study with a mind toward incorporating two-way streets within the context of a larger mandate to redesign downtown streets for the improvement of navigation by all users, not just drivers, and to make them friendlier for non-drivers -- cyclists, walkers, handicapped users, and so on, in a future tense.

Apart from the directional shift to two-way traffic -- even Phipps might notice if we don't do at least that much -- do absolutely nothing to inconvenience a driver, or to improve the experience for non-drivers. This shit's for show only, and nothing more. After all, the Feds are paying for it, and we can spin the paving project if nothing else.

The traffic engineers at HWC were happy to obey the mayor's orders. They got paid, another few thousand bucks passed into Gahan's re-election fund, and just as neighborhood activists were gearing up yet again to picket City Hall for ignoring its obligation to make streets safe, skateboarder Matt Brewer was killed by a driver where a dangerous curve at 10th and Spring feeds into an intersection at 9th, with vision chronically blocked by commercial vehicles that have been illegally parked on the street for the past 15 years without a single peep from ordinance enforcement.

NA Confidential: Brief question: has the accident report about Matt Brewer been released? I’m particularly interested in the role of those Williams Plumbing trucks forever parked illegally on the street, blocking the view. Thank you.

Chief Todd Bailey: All crash investigations handled by the Combined Accident Reconstruction Team are maintained by the Floyd County Prosecutor’s Office. I can tell you the case is still under investigation but if you’re looking for specific information you’ll need to inquire with the Prosecutor.


It's just another reason of too many that Nanny Barksdale got the Reisz-stag all wrong: It isn't the working conditions which are inhumane at City Hall. It's the ruling clique itself.

As if to highlight the gesture of thumbing his nose at critics, Gahan quickly appointed superannuated mafioso wannabe Warren Nash to the Human Rights Commission, and Nash just as rapidly engineered the hiring of his son the councilman to a job with the housing authority.

Jeffrey and the DemoDisnyDixiecrats looked out upon the carnage and found it good. That snoring you hear? It's the News and Tribune, eagerly defending the right of mayors to advertise.

Meanwhile, if you want to know exactly how Gahan botched the Speck plan for two-way streets, read this article. It's one of the best Strong Town pieces I've ever read on the topic:

"Instead of helping connect people to the places they need to go, our city has built expensive public facilities that are both life-threatening and insulting to folks who don’t drive. We have effectively removed much of the public from the public right-of-way. And that's not fair."


Fair, schmair. Deaf Gahan and baseball hall of famer Jim Rice don't give a rat's ass about fair. It's all about the money for them, as the rest of us push the beg button at the dysfunctional-by-design "crosswalks" and hope drivers don't mow us down.

In cities throughout America, traffic studies are conducted to determine the Level of Service (LOS) for cars. This scientific-sounding metric basically looks at the busiest 15 minutes of the busiest hour of the day, and determines how well auto traffic flows through a given intersection.

Traffic engineers use this data to justify road expansion projects. It’s a bit like showing up during that one holiday meal when you’re hosting every leaf on your family tree, and declaring that the dining room is cramped, so you should add a second story to your house.

Despite its limitations, LOS remains popular because it’s simple. When a street is clogged with traffic during peak use (i.e. supply equals demand), it earns an LOS grade of F. When there’s not another car between you and the horizon? Congratulations! You get an A!

By overemphasizing LOS, we justify expensive, overbuilt streets that are dangerously inhospitable to people—just so folks who use the least efficient form of transportation (single-occupancy cars) won’t be inconvenienced during peak travel times. In doing so, we ignore the many variables that influence the transportation system as a whole: land use and zoning, pedestrian comfort, bike safety, viable transit, trip generation, etc.

But what about the Level of Service for people who walk and bike? Enter the Multi-Modal Level of Service (MMLOS), brought to you by the Highway Capacity Manual. (Because nobody understands the needs of pedestrians, cyclists, and transit users like the dudes who design the highways.)

If you want insight into the mind of a traffic engineer, consider “space per pedestrian,” a key metric based on the width of the sidewalk and pedestrian volumes. I love this because it’s so ridiculous. 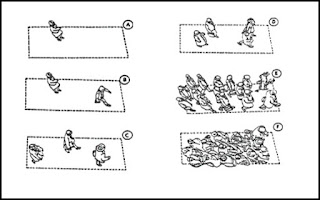 All that “space” is not a sign of success. Much of our public right-of-way is so hostile to cyclists and pedestrians that only the most desperate people—the folks with no other alternative—even attempt to walk or bike. If there’s a lot of space on a sidewalk, it’s usually because it’s a lousy or impractical place to walk; it's not comfortable or useful to people on foot. There are a lot of sidewalks like that in America ...