If I devote two minutes to providing solid information about the house at 921 Culbertson, are they billable minutes? Can I at least get a Dewey button, or maybe one extra newspaper article per month? 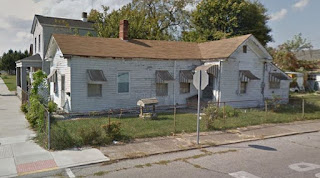 (Mr. Carter asked that his home address be redacted)

The News and TomMayBune's Chris Morris focuses on one decayed house in one neighborhood, and he is very disturbed by its condition.

Fair enough. You can get the gist and follow the link to his thoughts, below. Before you do so, recall that right across the street, there once was an historic tavern building which was sacrificed for Jeff Gahan's campaign finance enhancement -- and I recall the newspaper having little to say about it at the time.

ON THE AVENUES: A year later, the backroom politics of pure spite at Haughey’s Tavern still reek.

Let’s try not to forget the central point, one consistently obscured by Team Gahan’s relentless, PAC-financed and self-serving propaganda machine: Haughey’s Tavern might have been saved and rehabilitated into the sort of street corner anchor that these two new houses are utterly incapable of being, now or ever.

After all, Haughey’s did it for more than 125 years, with various occupants surviving floods, tornadoes, ice storms and changing times ... until Gahan's suburban-over-urban logic came along.


Make no mistake: Bird-dogging like Morris's in the current instance is appreciated. It never hurts to shine a light, and greater transparency is preferable in all cases. The aggrieved neighbor is absolutely right in seeking to persuade the newspaper to hold the flashlight -- something management isn't always seem interested in doing.

Of course, the newspaper typically ignores neighborhood matters like this house until handed a prurient reason to send a stenographer -- maybe a fire, or a drug bust -- and there apparently isn't a coherent editorial policy governing such matters (perhaps Bullet Bill Hanson is afraid of insulting a slumlord who advertises), but you already knew this. Just imagine if they devoted a similar focus more often.

But here's the annoying thing.

It took me, a rank amateur, all of two minutes to find the information in the next three photos. The house at 921 Culbertson is owned by Crest LLC, which recently purchased it from New Albany's redevelopment commission (more on governmental slumlordism another time), and which is registered to a fellow named Andrew S. Carter, who lives out in the county near Georgetown.

Sounds like a hell of a story. Too bad Morris didn't write it. If the reporter can't understand why anyone would even want to rehabilitate the house at 921 Culbertson, wouldn't the logical place for any intrepid newspaper reporter to start be actually calling the guy who owns it and asking him?

While the veteran newspaperman is at it, perhaps it would be instructive to delve into the relationship between the city's redevelopment and building commissions as it pertains to all those properties owned by the city itself, sitting there, vacant.

Is Carter a donor to the mayoral slush/re-election fund?

How does one opt out, anyway? 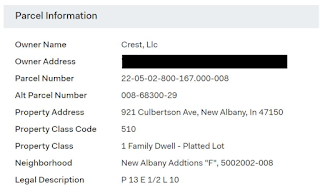 Read the story if you dare.

MORRIS: Time has run out on this old house

I'm a guy who loves tradition which includes old buildings. I love history and only wish walls could actually talk. I would love to hear what the Town Clock Church walls would have to say.

Things change, and buildings like the rest of us age ... some better than others. I am all for old buildings being rehabbed and reused. They add so much character to cities and neighborhoods.

But there comes a time when a bulldozer may be a better solution than a paint brush.

The best example of this is the house at 921 Culbertson Avenue in New Albany ...