#LiveLikeMatt -- and how you can help Matt Brewer's wife and family. 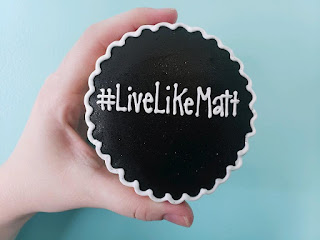 The cookies are from Sweets by Morgan, located at 533 Spring Street in Jeffersonville.

Starting Thursday August 9th at 10am we will have these cookies available at the shop until further notice.

There will be no price listed on these, we just ask that you make a cash donation. 100% of the money raised will be donated to the wife and family of an amazing man we all lost on Monday night.

Matt Brewer was a friend to all and enemy to none. He had a smile that would brighten your worst day and all of us here at Sweets by Morgan will now strive to #LiveLikeMatt.

If you are unable to stop by the bakery, please consider making a donation to the GoFundMe page. Every $1 helps.

On behalf of Matt Brewer and to help Brook Brewer during this time, we are asking for any possible donation. The money will go towards any emergency and hospital costs, funeral and memorial service, and any extra help for Brook. Any amount at all will help the cause, and we all know Matt would have given the shirt off his back if he had one on.

Look, I'm a jaundiced 58-year-old who has been blogging for 15 years come November. A few days ago, NAC's 13,000th post was published. Not one of them ever surpassed 11,000 page views, until the sad news came that we'd lost Matt, and I posted it.

I'm not telling you about these statistics for any other reason than they numerically attest to the depth of love and affection we all felt for this wonderful guy. That's 45,000 page views -- and only 37,000 people in all of New Albany. That's an intensity of emotion unprecedented in my time observing local affairs.

As Andrew Nicholson pointed out earlier today, Matt's sad passing also has brought out the best in his people, who are rallying around Matt's family in this time of need. In like fashion, Andrew passes this along.

The ER at Baptist Floyd Hospital is having a cookout this Friday to benefit Brook Brewer and Matt, can you get the word out? $5 a plate can also help out with side dishes or any donations welcome. The night shift is also planning something for Saturday night, I will send details when available. 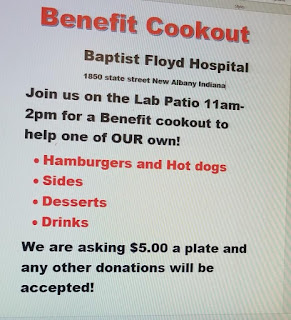 The local newspaper of record provides coverage of yesterday's gathering of hundreds at the skate park on the riverfront. There's a plan afoot to rehabilitate the skate park, and Matt was involved as a consultant. It is slated to be called the New Albany Flow Park, which is nice enough, but it's a replaceable name since overtaken by events.

By community acclamation, it's now the Matt Brewer Flow Park, or some similar wording of explicit recognition. I strongly encourage local powers that be to endorse this naming notion without further delay. Bureaucracy can be damned -- we all know Matt's name needs to be on a facility of which we all can be proud.

Let's not settle for less.

Brewer remembered as a 'great guy'

NEW ALBANY — There was something special about Matthew Brewer according to those who knew him. He always had a smile on his face and a positive word to say.

"We always looked up to him, he had a lot of skating knowledge," Chris Flores said Tuesday afternoon at the New Albany Skatepark. "He was just a really nice guy. He was nice to everybody."

Flores, and other friends of Brewer's, attended a special gathering at the skatepark to remember their friend who was killed Monday evening around 9:30 at Spring and East Ninth streets from injuries sustained after being struck by a minivan while riding his skateboard.

The accident is still under investigation, according to New Albany Police Chief Todd Bailey.

Judy Brewer and her husband David were at the skatepark Tuesday and were moved by the number of friends and acquaintances who showed up, many with skateboards in hand to honor their son, who had adopted skateboarding as a way of life ... 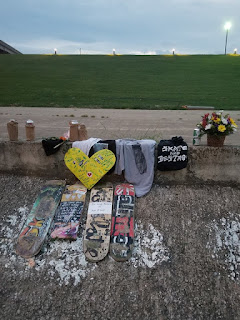