PINTS & UNION PORTFOLIO: About a burger, and draft list notes. 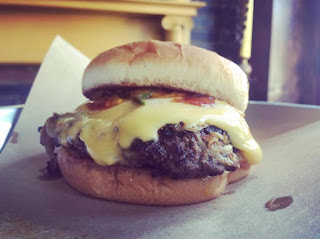 The "Oklahoma" burger was introduced earlier this week at Pints&union. It's a riff on the Oklahoma Onion Burger, with homemade ketchup, mustard and pickles, and buttered with Duke's Mayonnaise.

The burger is $6, and a side of fries is $2. Throw in two Imperial pints of Falls City Classic Pilsner at $4 each, add tax and gratuity, and it comes to $23. That's a good price point for quality food and drink.

Owing to difficulties with installing the kitchen hood, the food program was the last component of Pints&union to be "dialed in," and the process continues. To date, I've enjoyed everything I've tried.

It's important to know that we are a bar with a kitchen, not a full-service restaurant. Small plates inspired by international street food make up the menu, and there'll be changes from week to week, although the burger is an everyday item.

Elsewhere, the pub got some good ink at SoIn. Thanks, Mikael.

Pints&union: Commune with the Past in the Present, by Mikael Attebury (Clark-Floyd Counties Convention-Tourism Bureau)

... This isn’t the place to watch the game – not that there’s anything wrong with sports bars. Pints&union just is not that kind of place. It is a place to talk to your neighbors, to read, to write, or simply to revel in the joy of existence with friends, pint in hand.


I'll spare readers the longer narrative about beer wholesaler iniquity, a fact of life that I've re-learned surprisingly quickly after a decade away. Here's the short version.

Pints&union began operations a month ago with the stated intent of specializing in Fuller's London Pride on tap; we sold three kegs in 12 days, and suddenly the entire state of Indiana ran dry, with reinforcements not expected until October.

On Monday I ordered a keg of Anchor Porter, only to be informed that the wholesaler is depleted and cannot restock for at least a month.

I substituted Wychwood Hobgoblin for Fuller's, and now a fill-in for Anchor Porter must be determined next week. Suitable temporary replacements include Bell's Porter, Founder's Porter and Great Lakes Edmund Fitzgerald Porter, the latter back in Indiana after a decade or longer away.

All three are solid, but the point to this digression is that having determined to buck the on-premise trend of tilt-a-whirl draft lists, it appears my war also will have to be fought with the wholesalers, who understandably have adapted their purchasing to reflect constant rotation, as opposed to stability.

I've spent my entire career in the beer business swimming against the tide, and it's too late to stop now. To complain would be churlish; rather, it's time to go over the heads of wholesalers, grit my teeth and do their jobs for them as in days of old by directly contacting breweries and importers.

NABC's Old 15-B Porter is better than the Great Lakes. Just saying.

I like them both. But we've resolved to plug the gap with Bell's Porter.