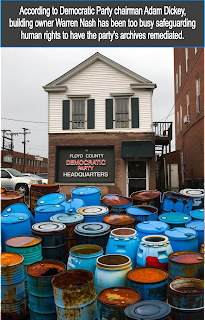 The Green Mouse had been under the impression that Tuesday's redevelopment commission meeting would be the occasion for David Barksdale to learn why his new pals at City Hall have allowed the Moser Tannery to sit unattended for two years, with the roof now caving in.

Since yesterday, as three more stately trees succumbed to the Tree Board's deforestation fetish, the remainder of the "neglected" structure by the wetlands has started observing the laws of gravity.

Look what the great historic preservation savior Jeff Gahan has done to the Moser Tannery building.

Well, we can't blame the Schmitt Family for THIS purposeful dilapidation. Maybe Barksdale's Reisz Mahal fawning bootlicker bonus included a handy gag order for the eventuality of a quid pro quo, but at any rate, the newspaper's reporter seemed only to notice bravely bold Sir Adam, recording the DemoDisneyDixiecratic chairman's canned pieties about soil testing.

... Redevelopment Commission Vice President Adam Dickey said this is a step that will help the city return the property to a productive use that fits the community.

"This is us as a city doing the right steps and doing our due diligence to make sure it's safe," he said. "We don't want to create a site that years later we determine we didn't do an effective job cleaning up."


Even as Dickey spoke, the Moser Tannery was crumbling. Our pillars are big wankers in a tiny and fast evaporating puddle, each and every one of them.

Not a single tree in this city has a chance so long as David Barksdale and Jeff Gahan wield the chain saws, and Freud would have a field day with the phallic symbolism.
Posted by The New Albanian at 8/15/2018 07:25:00 PM