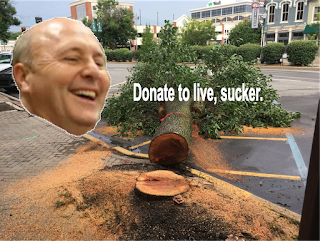 Because for the clique to even intelligently discuss it, they'd first be compelled to imagine it. They can't, and it's not even close.

And so we settle for the best that C-minus students can offer. It isn't much.

‘A VIRTUOUS CYCLE OF GREEN’: HOW STREET DESIGN CAN BE CALMED BY NATURE, by David Goldberg (Sightline)

A revolution is brewing in the streets of Cascadia’s major cities. Not since the mid-20th century has this region seen such a wholesale remaking of city rights of way.

Rapid growth is driving experimentation in ways to move more and more people through the same corridors, whether by foot, bicycle, transit, rideshare or private vehicle, all while accommodating a rising tsunami of deliveries. And as as ever more buildings fill urban space, those public rights of way become critically important refuges for greenery.

Until recently, traffic engineers designed streets solely to move cars. For them, street trees were to be eliminated as roadside hazards and landscaped zones were a hindrance to “vehicle throughput.” Today, though, planners increasingly see space for trees and plants as vital to safety, clean waterways, and resiliency and adaptation to climate change.

Some cities are beginning to fuse four strains of fresh thinking that have emerged over the last decade or so:

“Trees and other plants clean the air, add economic value to real estate and commercial sales and they make places where people want to be,” said John Massengale, co-author with Victor Dover of Street Design: the Secret to Great Cities and Towns (Wiley 2013). “Perhaps most importantly, they slow cars down, which is critical to achieving Vision Zero.”

“There is a virtuous cycle of green,” said Brice Maryman, senior landscape architect at MIG|SvR in Seattle. “Giving street space over to plants and trees helps slow vehicles, and once you have slower vehicles you can use even more space for natural functions.”

Also, some of the same techniques that can be used to calm traffic and create safe zones for people on foot or bicycle offer opportunities to introduce more soothing vegetation and ecological functions—ensuring that complete streets are green streets ...