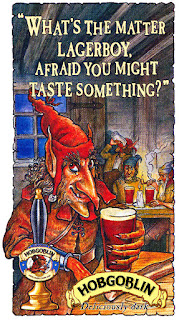 The good news from my friend, the beer wholesaler rep:

"You WILL be able to get more kegs of Fuller's London Pride."

And the bad news?

"Not until early October."

There was a time when I'd have reacted to news like this with a tremendous display of beer-fueled vituperation. After all, I'd spent months talking about picking an everyday draft beer lineup at Pints&union and keeping it in place, and just as much time praising the awesomeness of Fuller's as a stalwart of the solidity.

My friend had warned the wholesaler's beer buyers well in advance, and the ordering schedule duly was moved forward in an effort to accommodate the bump in sales. But go and sell three kegs of London Pride in 12 business days, and the hiccup occurs, anyway. My specialty, disruption.

C'est la vie, or the equivalent in English.

Consequently, if everything goes as planned, as well as any other disclaimers I might insert in this space to cover the inevitable coughs and contingencies, the objective this week is to insert Wychwood Hobgoblin in place of Fuller's. The first two kegs of Hobgoblin will be arriving on Tuesday, and when the London Pride is depleted, the change will be made.

Since we have a couple of months to make do without London Pride, there'll probably also be an audition of draft Old Speckled Hen. I suspect the OSH will be a tad closer to London Pride in character, while if my increasingly muddled memory is to be trusted, the Hobgoblin is amber-ruby-brown with lots of fruity notes.

One aspect of Hobgoblin is to be cherished: the confrontational advertising slogan, "What's the matter, lager boy - afraid you might taste something?"

Of course, the context matters. This hilarious nose-thumbing is not directed against the majority of classic German lagers or a beer like Pilsner Urquell, but references the ubiquitous (and often cheap) international golden lagers crowding out traditional ale styles in the United Kingdom.

Recall that football hooligans weren't ever tagged "ESB Louts" and maybe it will make better sense. As for how generic lager managed to supplant glorious indigenous ale in the first place, we'll have to save that one for a Beer Tuesday.