Last week I had the pleasure of meeting Evan Stoner for the first time. 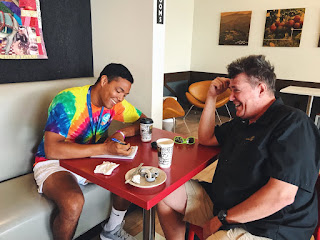 Evan Stoner's reputation as a principled human being long preceded our chat over coffee. He is an organizer and an activist in the cause of protecting and furthering fundamental human rights and freedoms, not from shabby and shallow political expedience, as in the case of Nawbany's Adam Dickey and Jeff Gahan ...

Gahan belatedly rediscovers "pride," appoints Warren Nash and Idi Amin to the long lost Human Rights Commission, and disappears back into the bunker.

... but out of deep personal commitment. In short, speaking as an oldster, Evan is one damned impressive young man. Many readers already know Evan, so for those who don't, here's a dollop of background.

From March of 2016, a statement of first principles.

A Better Future for Jeffersonville

JEFFERSONVILLE— Mayor Mike Moore proclaimed June 2018 to be LGBT Pride Month in Jeffersonville this morning for the first time in the city's history.

“The city of Jeffersonville encourages all citizens to stay connected with one another and to treat all people with love and kindness,” he said.

LGBT Pride Month is celebrated nationwide each year in June. In the proclamation, Moore stated that “this celebration by the LGBT community is about inclusion to promote dignity, equal rights, self-affirmation and is a way of increasing society's awareness of the issues we face.”

Jeffersonville Pride founder Evan Stoner said the city's recognition of pride month is an historic day for LGBT inclusion in the community. Having the city's first pride parade and festival in 2016 was one gigantic step, he said, and this proclamation is another step forward.

“This is a historic day for the city of Jeffersonville,” he said. “With this proclamation and the mayor's signature, we are leaping Jeffersonville forward yet again.”

Stoner said it was a courageous act for the mayor to sign the proclamation.

“It doesn't take courage. It simply takes an open mind.”

Never has the contrast with Deaf Gahan been so vivid. Note that just as Jeffersonville was proclaiming LGBT Pride Month, our dim bulb ("no courage -- never mind") was contemplating pride on the down low: Not to be outdone, Deaf Gahan plans a Pride Parade route for New Albany.

October is a long way off, but put this one on the calendar now. Think of it as another level.