Not to be outdone, Deaf Gahan plans a Pride Parade route for New Albany. 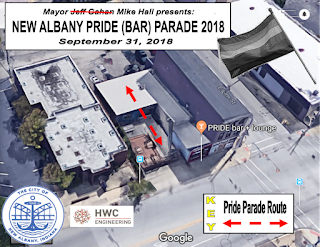 It came time for Mayor Deaf Gahan to speak at the city council meeting, and miscommunications minister Mike Hall came bounding to the podium.

"Good evening all. Mayor Gahan wants you to know he's keeping up with the Fischers and the Moores, and so we're going to have a Pride Parade, too. Gentlemen and gentlemen, here's baseball Hall of Famer Jim Rice to talk about the parade plan."

"I think you approved it in the amendment appended to the Sewer Reclamation Act of 2016, maybe it was the redevelopment-stuffed-envelope of 2017. It was under the mistletoe, remember? Anyway, why quibble over details? We didn't want to trouble elected officials with internal bunker matters. Tell 'em, Jim."

"Hi, I'm Jim Rice of HWC Engineering. This INDOT-approved Pride Parade plan definitely will keep heavy trucks moving through your neighborhoods, and that's the only thing Mayor Gahan ever wanted us to do, understand? C'mon, if we wanted streets to be safe for pedestrians and bikes, they have grass and trees and be park units, right? HOW CAN WE MAKE ANY MONEY FROM PEOPLE MOVING UNDER THEIR OWN POWER ... "

"Thanks, Jim," said Hall, motioning to security. "The flowers will be delivered on Tuesday morning just like always. Councilman Barksdale, do you have a question?"

"Mike, this whole administration is just wonderful, and I'm just proud as punch about all this pride, but you didn't say if any trees will be removed for the parade. I can make that happen, you know. My peeps on the Tree Board know chainsaws. Take down those trees, and it makes it easier for people in their cars to see the buildings -- I mean, the parade banners."

"Unfortunately, no -- the whole parade route is inside a bar. It's not even historic."

"That's a relief," interjected councilman Caesar. "Pride Parades like this are an amazing example of cooperation between our city officials and those tireless folks over at One Southern Indiana, but we can't lose sight of the fact that every small step in the direction of greater civil rights and tolerance needs to be taken safely behind closed doors where DemoDisneyDixiecratic voters can't see them."

"Don't worry," Hall replied. "Why do you think the mayor had me put the vanilla filter on the rainbow flag?"

"That's my idea of quality of life," gushed councilman McLaughlin.

"Okay," concluded Hall. "Any more questions? If not, I have one more item of business from the mayor."

"Great! Mayor Gahan also wants you to know that in the spirit of Indoor Pride Parade, the New Albany Human Rights Commission has not had a single complaint in three years, ever since the mayor stopped making appointments to the HRC, preventing any inconvenient quorums from breaking out."

"No quorum -- no problems. See how easy it is in New Gahania?"

The preceding is satire. Yesterday was real-life:

It was my first Kentuckiana Pride Parade, but it won't be my last. 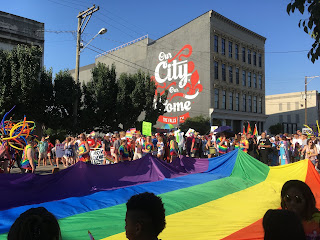