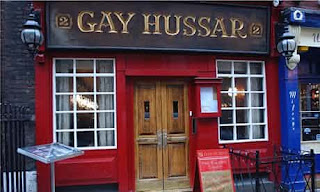 The Gay Hussar may be closing.

Last orders at the Gay Hussar – the left’s hotbed of plots, gossip and goulash, by Rebecca Smithers (The Guardian)

For 65 years, the Soho restaurant has been the place where Labour lunches. But next month might see it shut

The Gay Hussar is among the most celebrated restaurants in London but its fame rests not so much on the quality of its chilled wild-cherry soup and its goulash, but on its reputation as the beating heart of political gossip.

The Hungarian restaurant in the centre of Soho has played host to generations of politicians, many drawn from the left, including Aneurin Bevan, Michael Foot, Tom Driberg, Ian Mikardo and Barbara Castle. It is also rumoured to be where the Tory wets fruitlessly plotted the overthrow of Margaret Thatcher in the early 1980s.

But after 65 years as a hotbed of political plotting, backstabbing, deal-making and gossip, it is due to close its doors for the last time in June.


It's always fascinating to consider an eatery or watering hole with a back story ranging far beyond everyday food and drink, but first things first. In the present context, a "Gay Hussar" describes a merry, carefree light cavalryman, with the adjective "gay" reverting to its original use.

Gay meaning ‘homosexual’ became established in the 1960s as the term preferred by homosexual men to describe themselves. It is now the standard accepted term throughout the English-speaking world. As a result, the centuries-old other senses of gay meaning either ‘carefree’ or ‘bright and showy’ have more or less dropped out of natural use. The word gay cannot be readily used today in these older senses without arousing a sense of double entendre, despite concerted attempts by some to keep them alive. Gay in its modern sense typically refers to men (lesbian being the standard term for homosexual women) but in some contexts it can be used of both men and women


Times (and words) do change. Hussar originally described a specific sort of Hungarian horseman of the 15th century, and the term later was adopted by cavalrymen of a similar model, irrespective of national origin.

The etymology of "hussar" is muddled. The word may date to ancient Rome; at the very least, the Hungarians borrowed it from nearby Serbia, where a "husar" was a type of medieval brigand, often conducting what we'd now call "guerrilla" warfare against the Ottoman Turks.

Much later there was a popular Hungarian operetta called The Gay Hussars, written by Emmerich Kálmán, which probably accounts for the name of London's Gay Hussar restaurant, where the only beer on the menu is Czech Budvar -- but we always can make do with Bull's Blood wine from Eger.

Speaking frankly, my mouth waters while reading the menu of Hungarian dishes. What I'd give for a properly rendered töltött káposzta (cabbage roll) at this precise moment. Significantly, the author of The Economist's "Bagehot" column does not share my favorable view of Hungarian cuisine, explaining the probable demise of the Gay Hussar by reference to an alarming social trend.

... But the restaurant’s imminent death surely has something to do with the decline in political drinking. Few people went to the Gay Hussar for the food. Hungary’s is not one of the world’s great cuisines and the Gay Hussar’s rendering of it was more faithful than inspired. Nor did they go for the comfort. The tables are cramped, particularly upstairs, and the corridors are higgledy-piggledy. They went for the booze—or, more precisely, for the intoxicating mixture of drink and gossip, alcohol and plotting, that once made British politics such a joy.

Drink has certainly not disappeared from public life. The Westminster village is about to embark on a long cycle of summer parties (last July David Lidington, a Tory MP, blamed plots against Theresa May on “too much sun and too much warm prosecco”). The summer season will be followed by the even boozier party conference season. Drink still has the power to change the course of political history. Ed Miliband introduced the current system for electing the Labour leader because a drunken Labour MP, Eric Joyce, assaulted four other fellow drinkers and the party’s attempt to replace him produced fears of vote-rigging by unions. If Mr Joyce hadn’t got so sloshed, Jeremy Corbyn might still be on the backbenches, and Labour might have campaigned much more vigorously for Britain to stay in the European Union.

That said, today’s Westminster looks like a temperance meeting compared with the Westminster of old ...


The conclusion is unspeakably melancholy.

The saddest reason is the rise of a professional political class. Drink provided a link between politics and society. The Labour Party recruited MPs and activists from working men’s clubs that existed in large part to provide workers with cheap drink. Ministers routinely let their guard down when they demolished the ministerial drinks cabinet with their civil servants and advisers. Today, both Labour and the Tories recruit their MPs from think-tanks and ministers keep up their guard at all times. The decline of political drinking has snapped yet another link between the political elite and the people that they are supposed to serve.