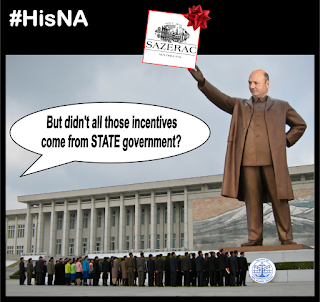 It's my guess that at tonight's city council meeting, there'll be joyous and sweeping approval of the incentives sought by Sazerac of Indiana to complete its purchase of the former Pillsbury plant on Grant Line Road.

R-18-04 Resolution Concerning Statement of Benefits for Real Property and Personal Property for Sazerac of Indiana, LLC by the Common Council of the City of New Albany (Caesar)


I can picture Dan Coffey asking a few questions about the wisdom of "anchoring" a local economy on booze, but beyond this, the discussion stands to be perfunctory amid palpable sighs of relief that the Indiana Economic Development Corporation has at long last bailed out a City Hall team most recently seen tossing $7 million worth of panic-stricken economic development IOUs at the exhaust fumes generated by General Mills' moving vans.

Since last week's announcement, observers have been uniformly dazzled by Sazaerac's promise of jobs with an "average" wage of $24 an hour. Cynics like me might ask whether this average is calculated by including the remuneration for William Goldring, the company's owner (worth $3.9 billion at last glance); or, perhaps more appropriately, given the union jobs lost at the defunct Pillsbury, whether any of these new jobs come with union agreements.

Brief research reveals no information for a bottling and packaging facility like that projected for New Albany. According to a 2016 article by bourbon business writer Fred Minnick, the union agreements at Sazarac's distilleries in Kentucky (1792 Barton and Buffalo Trace) are “confidential.”

At least they exist. Of course, there'll be no distilling in New Albany (except at Donum Dei, around the corner).

Consequently, and just for the hell of it, readers are invited to examine the statements at these two web sites devoted in part to employee ratings of the workplace environment. 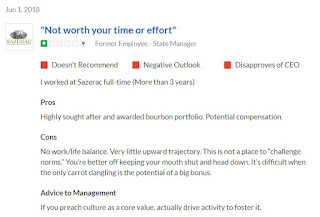 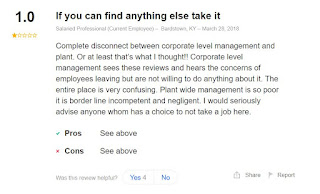 I'm taking a balanced view of tonight's proceedings. The deal surely is inevitable, having been played out behind the scenes for quite some time.

Consequently, allow me to note that amid the millions of dollars involved in such a deal, and the time it typically has taken to rig them, our local elected representatives officially will have been given a whole four days to scrutinize the numbers before voting on the abatements and incentives.

Yes: it's economic boilerplate of the sort that works like Viagra for campaign finance, and surely not the first time council members have heard of Sazerac; presumably Dear Leader's minions have been speaking confidentially to those expected to rubber stamp Sazerac's arrival, and swearing them to silence.

At the same time, the public appearance is very familiar. Months-long periods of great secrecy, followed by triumphal propaganda and the pressing urgency of an immediate deadline.

Metairie, La.-based Sazerac Brands LLC will create 110 jobs at the new operation, which is dependent on the project receiving approval for tax credits. The company hopes to begin operations late this year, initially with 50 employees.

The plant is expected to be fully operational by the end of 2021, and the new jobs will pay an average wage of $24 an hour plus benefits.

Sazerac's portfolio includes Pappy Van Winkle, Buffalo Trace and many other brands. The company has an office in Louisville.

The company will expand its processing, blending, packaging and distribution capabilities at the plant. It would be its first project in Indiana and expand its presence near Kentucky, where it currently employs 1,000 or more people.

Jeff Conder, vice president of manufacturing for Sazerac Co., said the type of spirits that will be processed and bottled at the facility will be determined after the company acquires the plant, which is expected to occur in the coming weeks if the incentives are approved ...