BEER WITH A SOCIALIST: Whether sheep stealer or highwayman, he was hanged just the same at Cannards Grave. 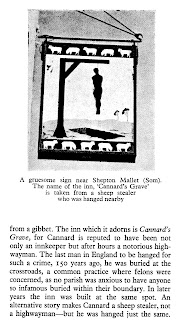 Bud Light drinkers used to feel this way when they wandered by mistake into the Public House. The illustration comes from a 1972 book called British Inn Signs.

Where five roads meet on the A37 near Shepton Mallet (Somerset) is a gruesome sign of a man hanging from a gibbet.

The back story takes on a number of versions, which are considered in this modern update.

The Story of Cannards Grave

To the south of Shepton Mallet is the oddly named Cannards Grave, where, according to legend, the ghost of 17th century publican Giles Cannard still walks.

Tom Kennard, often called either Giles, or Tom the Taverner, was the landlord of a public house which stood on the crossroads between the Fosse Way and many other roads to the West Country. Opposite the inn stood a grim reminder of the relative lawlessness of those times, a gibbet, on which smugglers, highwaymen, bandits and other miscreants met their end ...

It looks as though there's still a pub on or near the site: The Highwayman, Cannards Grave, although the first review expresses annoyance.

Was not impressed with this pub. The beer (St Austell) was cloudy and didn't taste good. Changed it for the other one on, can't remember what it was, and it was the same. The Landlord or Manager said it had recently been changed and was the top of the barrel! Top of the barrel?? Real Ale isn't served from the top!!