BEER WITH A SOCIALIST: These "new rules of pub etiquette" are a must-read. 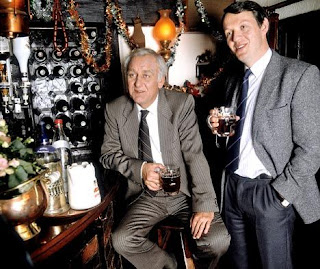 "Punter" can mean several things, but in British pub-speak it's "the regular sort of person who hangs out at places like pubs."

And: "boozer" is just a synonym for pub, and in the United Kingdom, most (maybe all) pubs are based on counter service, hence the opening section about the art of the queue.

Who’s next?
Like good guitar bands or working-class actors, Britain still produces exceptional bar staff but their numbers have dwindled alarmingly. Professionals who can process that “invisible” bar queue with the confident oversight of an air traffic controller, while filling multiple glasses with octopus-like efficiency, are now a real rarity. In most pubs, that queue has to manage itself and responsible drinkers must lead by example to ensure it does not descend into chaos.

In fact, these rules of etiquette should come across as common sense for anyone who has consumed drinks in public, anywhere at all. They're not really new, but then again, teachers teach the same topic over and over to incoming classes who are unaware of the importance. So it goes.

There'll be a quiz.

The new rules of pub etiquette: don't flirt with bar staff or steal the glasses, by Tony Naylor (The Guardian)

The number of UK pubs is falling and there is less consensus about how punters should behave. Here’s a guide to getting the most out of a trip to the boozer

In 2018, the pub occupies a rather uncertain place in British society. There are 50,000, nationally. But that figure has dropped by 10,500 since 2000. People are drinking less, drinking less frequently and, arguably, there is far less consensus these days about how to behave in pubs. Ahead of Beer Day Britain on 15 June then, here’s a fresh look at pub etiquette. How can we all get along in the modern boozer?

Email ThisBlogThis!Share to TwitterShare to FacebookShare to Pinterest
Labels: Beer with a Socialist, etiquette, pubs, The Beer Beat

Not to worry, I would never flirt with you.