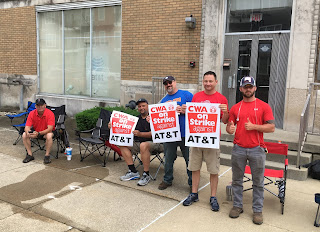 I was walking up Spring Street earlier and stopped to chat with the Communication Workers of America (CWA) union members who are on strike and picketing AT&T. I'm not positive, but I think they're from Local 4703.

It was a pleasure to hear their case, and I wish them the best. Lots of passing drivers were honking in solidarity.

This week, CWA filed unfair labor practice (ULP) charges against AT&T and NABET-CWA employer Nexstar Media Group for refusing to provide information about each company's plan to use its tax windfall to invest in its workforce.

Before the Tax Cuts and Jobs Act passed, AT&T promised that corporations would use their massive gains from the bill to raise wages and create "7,000 good jobs for the middle class." Instead, just days after the tax bill became law, the company announced more than 1,500 layoffs, and has continued to stonewall workers fighting to protect U.S. jobs at the bargaining table – despite receiving $20 billion as a result of the tax bill.

The charges are the latest escalation of efforts to hold corporations accountable at the bargaining table for the tax bill promises they made. In recent months, CWA and other unions have filed information requests to find out if increased corporate profits from the tax bill are really going to raise wages and create jobs.

CWA's Executive Board has voted to authorize a potential strike by 14,000 workers covered by AT&T’s Midwest and Legacy T contracts, an action that gives CWA President Chris Shelton the go-ahead to set a strike date if an agreement can't be reached. Workers voted on April 10 to authorize a strike.

As AT&T faces scrutiny for paying $600,000 to Trump attorney Michael Cohen, the company continues to stonewall workers at the bargaining table over the need for good, family supporting jobs.

"AT&T paid six-figure sums to a shady consultant who provided nothing of value to the company but is unwilling to commit to family-supporting jobs in the communities that it serves," said CWA District 4 Vice President Linda L. Hinton. "If AT&T refuses to protect the good jobs that support our families and communities, our members will take action. AT&T promised to invest in its U.S. workforce if the GOP tax bill passed. We're going to hold them to that promise – even if it means going on strike."

"AT&T's claims that Michael Cohen did 'real work' for the company are laughable," said Lisa Bolton, Vice President of CWA Telecommunication and Technologies. "We know who does the real work at AT&T – our members. It's time for the company to agree to a fair contract that provides good jobs with affordable benefits."

AT&T CEO Randall Stephenson promised to create 7,000 jobs if the GOP tax plan passed. Instead, despite a $20 billion windfall as a result of tax cuts in the bill, AT&T announced thousands of layoffs. The layoffs come as the company continues to eliminate good, middle-class jobs and rely increasingly on low-wage contractors overseas, devastating families and communities across America.

Before the Republican tax bill passed, AT&T CEO Randall Stephenson promised that every $1 billion in tax savings would create “7,000 good jobs for the middle class.” Instead, just days after the tax bill became law, the company announced more than 1,500 layoffs – compounding workers’ concerns about the company’s practice of shifting work to low-wage overseas contractors, which many believe is hurting the quality of service and damaging AT&T’s brand. The company’s touted investment of just $1 billion on capital projects and one-time $1,000 bonuses to employees is equivalent to just 7% of its expected annual profit from the cuts. Overall jobs numbers at AT&T are down 29,000 from two years ago.

While AT&T refuses to release details about plans for its $20 billion in tax savings, a recent report from CWA found that AT&T has closed 44 call centers and eliminated 16,000 call center jobs in the last seven years. The report reveals the devastating impact of recent call center closures across the Midwest, an area that has been particularly hard hit by closures and layoffs. Meanwhile, the company’s latest quarterly earnings report reveals $4.7 billion in profits and indicates that AT&T is spending more than ever on dividends and buybacks.