Apartments above, vacant storefronts below. Why do commercial spaces in mixed use developments remain empty?


Obviously, we have less of a problem with vacant commercial spaces in new developments because there are fewer of these sort of extravaganzas in New Albany than in larger cities.

Our civic tastes run to free-standing strip mine sites on formerly forested hilltops.

The perpetually vacant (though reasonably sized) corner commercial space located within the Break Wind Lofts at Duggins Flats was discussed here in January of 2017.

Two months ago, a local restaurateur told the Green Mouse that the unfinished potential eatery space in the former showroom actually is priced fairly -- for being unfinished.

Flaherty and Collins apparently is offering to lease this space at the low bargain rate and provide something like $50,000 in cash for the build-out (the Green Mouse was told by the restaurateur that it wasn't enough of an enticement to interest him), but the dollars-per-square-foot price fairly skyrockets if the building's owner must finish the space.

Always be aware that as City Hall touts the many restaurants and bars downtown, as though it had anything whatever to do with their founding and operation -- and you can ask virtually any eatery owner to explain where the bulk of the start-up capital originates, this being with them, and not a magical bunkerside ATM -- the fact that the city subsidized the entirety of the Break Wind development means that the city also is subsidizing the eatery or bar that eventually comes to rest in the rough unfinished space. The city might as well be the one writing the check for $50K, right?


Rachel Quednau breaks it down in the article linked below.

The reason these (often) mandated retail spaces remain empty is because they're priced too high and sized too large for indies; cookie cutter developers with little interest in the real world apart from grabbing municipal abatements and incentives don't bother very much to consider what might actually work in these commercial spaces, and they're willing to sit on emptiness rather than put in the effort to learn.

Or: the polar opposite of the patience and pure acumen that our local developers (Resch, Chalfant, the Carters) have displayed over years of grassroots transformation.

And who gets the money? Faraway folks like Flaherty and Collins from Indianapolis -- then it comes back around to the mayor, which was the point from the very start. 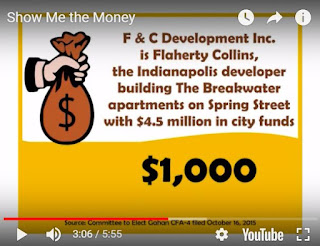 It isn't rocket science after all.

What’s up with all those empty commercial storefronts in new mixed-use developments? by Rachel Quednau (Strong Towns)

Milwaukee, Wisconsin, where I live, is going through a massive building phase, with new construction popping up on every corner in and around our downtown and other popular neighborhoods. If you live in any number of mid-sized cities, this is probably a familiar story. And because recent trends in urban planning have encouraged a return to mixed-use developments, those sorts of buildings dominate the new construction landscape. It has resulted in some lovely new ground-level restaurants and shops emerging in areas that previously lacked much street life.

But here’s the more common picture: a cookie-cutter five story apartment building over a vacant commercial space. This image is probably also familiar to you if you live in one of those cities experiencing an urban growth spurt. One might expect this set-up to last a few months, perhaps, while the apartment units are in the process of being filled and the building manager seeks a commercial tenant. But in fact, in my city, it’s not unusual to see a commercial space sitting empty for months and sometimes years. There are buildings like this near my home and, while they may be a shade better than the derelict one-story structures or vacant lots that used to occupy the area, an empty space is an empty space. At the end of the day, a vacant storefront makes the whole street feel neglected and undesirable, and it isn’t fulfilling its purpose.

At first, the whole scene just didn’t make sense to me. What business owner wouldn’t want to move into a brand new space with freshly painted walls, new windows and a blank canvas to lay out in whatever way suited the needs of the business? Why were these storefronts sitting empty?