Free bus rides? "It is a question of political priority." 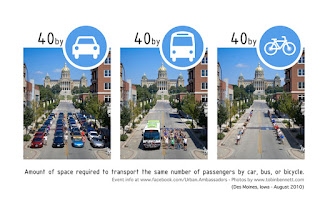 "On July 1, the entire country of Estonia will create the largest 24/7 free public transit zone in the world."


Starting in November, Madrid will make clear that downtown streets are not for drivers.


Also, I keep returning to a rant: until the moment when the Regional Development Authority begins talking about mobility solutions that involve modes of transportation like buses and light rail, as opposed to more of the same passenger cars with only the driver inside, then I'm not taking the RDA seriously.


What can I say, Wendy. I'm a Europhile social democratic liberal arts/humanities major.

“It is a question of political priority.”

Dunkirk is a shrinking, suburban city on the northern coast of France. It’s a car town, where public buses are a mode of last resort: They represent only five percent of trips.

But when Patrice Vergriete ran for mayor in 2014, he envisioned something different: a sustainable city that allures and serves young people, families, and the elderly alike. So he made a radical campaign promise, which he thinks helped him win: make the buses free.

“I wanted to give back purchasing power to the families,” Vergriete says in an interview at CityLab Paris.

In 2015, Vergriete’s administration launched free weekend service. It was a popular move: Saturday ridership increased by 30 percent, and Sunday ridership by some 80 percent. People loved it, telling local media that they saved money and time by avoiding the stress of parking.

What’s more, passengers diversified. Before, transit in the Dunkirk area had been solely the province of the poor, the elderly, and young students. Now professionals and families—car owners, in other words—began to ride, too. They scarcely considered transit over driving when both modes cost them money, even if bus fare was as cheap €1.40, according to Vergriete. But a totally free option “made people stop and think,” he said.

Now buses in the Dunkirk region will be fully gratis, seven days a week, starting in September 2018. Dunkirk will be the largest city in France to offer such a service (though it won’t be the first).

But rider fares only ever made up about 10 percent of transit’s operating budget, which is about €50 million per year, he explains. The rest come from a special transport tax levied on businesses and the regional government’s operating general budget. Transit systems all over the world operate on similar budget breakdowns, where “farebox recovery” is quite low. When riders are already paying so little, “I think mayors should think about making it free,” he said. “It’s really a choice that we are making to charge” ...

I wonder. What would happen if New Albany revoked its TARC abdication and reclaimed its right to federal transpo funds?