2-for-1? Scott Blair describes a better way to save the Reisz building AND get a new city hall. 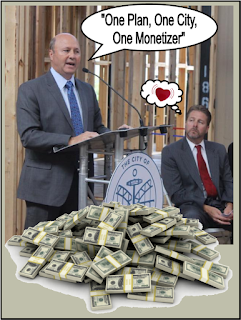 
During the course of answering 35 questions at last Thursday's city council meeting, corporate attorney Shane Gibson attempted to navigate contradictions on more than one occasion.

For instance, Gibson argued that a minimum expenditure of $10,000,000 to render the "blighted" (and "neglected," and "dilapidated") Reisz Furniture Warehouse Store into luxurious, expanded work space for Jeff Gahan was the very best solution yet offered to the problem of salvaging the structure, while simultaneously conceding that no other options have been considered.

How can we know it's the best plan when there's nothing to compare it to?

As 6th district councilman Scott Blair (I) illustrates with this Facebook comment, plenty of options exist. It's just that Gahan, Gibson and their ship of fools won't consider them.

I agree that a better use of the Reisz building is mixed retail and residential. The city could offer less than $1,000,000 subsidy to a private developer (purchase the building for around $400,000 and $375,000 and fix infrastructure). The city would recapture the subsidy over time through property taxes. A new city hall could go into an appropriate size building or be a new build. $4,000,000 seems to be a good estimate for new construction. A site could be the parking structure next to Big Four Burgers on Main St. Advantages are lower overall cost, bringing more people into downtown, and infill of a blighted lot.


In short, two buildings -- one rehabbed, the other new -- for half the proposed expenditure. And yet an idea like Blair's HAS NOT EVEN BEEN CONSIDERED.

A whole ten days. How could this be sufficient time for other interested parties to participate -- assuming they weren't scared away by previous public statements strongly implying the single plan was a done deal.

When it came to the two-way street grid changes, at least three traffic studies were conducted over a period of years before these statistics were handed to HWC Engineering to be ignored. Most of the final expense was borne by the federal government, and the campaign kickback gravy was especially succulent.

But $10,000,000 for the Reisz Elephant isn't being offset by a gift from afar, and Team Gahan has conducted no studies, and considered no other alternatives. It's Gahan's way, or down comes the building.

Blair's idea has one major flaw, because the work required to save Reisz and build city hall probably would not be finished before next year's elections, and completed bright shiny objects are essential to Gahan's flashcard campaign strategy.
Posted by The New Albanian at 6/24/2018 01:33:00 PM