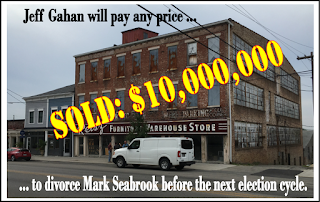 For the first time in ages, I walked out of the house tonight without my phone, and rather than turning back, decided to let it ride.

My head count at CM Coffey's library gathering was 40 at the peak, and this strikes me as a solid attendance.

Honestly, if you've been reading NA Confidential, chances are you've already heard what was discussed this evening. Following are a couple extracts from Chris Morris's newspaper coverage.

The New Albany City Council will take a final vote on the ordinance to purchase the building at its 7 p.m. meeting Monday in the Assembly Room on the third floor of the City County Building.


My 3rd district councilman Greg Phipps came to tonight's meeting and sat through most of it. That's worthy of commendation.

... The rallying cry from three of the four city councilmen against the project who were in attendance was for residents to call their district or at-large councilmen and express their concern, and to attend Monday's meeting. Knable was unable to attend Wednesday's meeting, but his wife Jessica did read a statement from him against the plan.

"We ask for people to fill that room," Aebersold said.

Mark Cassidy, a regular attendee at council meetings, also said if "a bunch of people show up, they will pay attention."

Thursday is weekly column day. I've been writing it for a while, but since the Reisz Elephant has coincided with the frenetic period of pre-opening activities at Pints & Union, times has become an issue.