Reisz Elephant: Lawyer Gibson hails redevelopment's back-room RFP fix as an excellent way to do business with just one company. 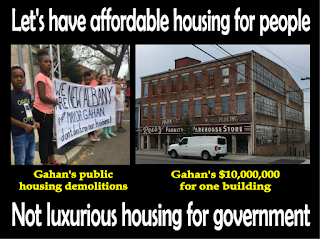 On March 27, 2018 the Redevelopment Commission approved a resolution to issue a Request for Proposals (RFP) for the city's City Hall Project.

Ten (actually nine) whole days were given for interested developers to submit proposals for a project already negotiated with Denton Floyd, and announced publicly seven months prior to the RFP.

In Denton Floyd's case, the very same Redevelopment Commission issuing this purportedly fair and open RFP already had given its developer of choice the money to buy the property.

At last Thursday's city council meeting, municipal corporeal attorney Shane Gibson lauded the fixed back-alley RFP process as an excellent way to to save money by excluding the free market of ideas. 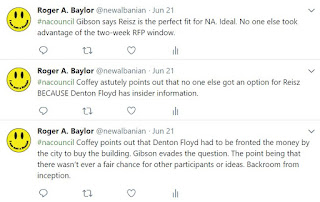 Are you finding the current occupant's arrogance a bit too much?

Let your council representative know and don't forget the meeting on Wednesday evening at the library.

In accordance with IC 5-23-5, the New Albany Redevelopment Commission (“Commission”), on behalf of the City of New Albany, Indiana (“City”), is seeking proposals from qualified developers for the development and construction of a new City Hall (“Project”) on property located within the City. The developer shall have title to the proposed parcel or show demonstrated ability to obtain title to the proposed parcel. The Commission anticipates entering into a public-private agreement for the Developer to provide site work, labor and material, as well as financing (as required), to construct the Project with the general characteristics described below:

• Minimum 20,000 SF
• Downtown location
• Redevelopment is preferred vs. new construction
• Other characteristics and specifications as may be identified and included in future design documents and agreements

The City would assume ownership of the site and improvements after a certain period of time to be proposed by offeror.

Information to be Included in Proposals

Proposals should include a written description of the Developer’s experience designing, financing, constructing, operating, transferring, and developing projects, as follows:

The Commission does not require you to submit a certified check or other evidence of financial responsibility with your proposal other than requested above.

The Commission will review all proposals and may enter into discussions with offerors to clarify and assure a full understanding of proposals. All offerors will be accorded fair and equal treatment with respect to any opportunity for discussion and revision of proposals. The Commission or its agent will make a recommendation for award of an agreement based upon compliance with the above-requested information, or shall terminate the request for proposal process.

Of all evaluation criteria listed in this Request for Proposals, the offeror’s focus on redevelopment, general project approach and financial capacity will be given the most weight by the Commission. The price offered in a proposal will be considered, but is not the primary determining factor. The Commission reserves the right to modify or cancel this project at any time before a developer enters into a formal agreement with the Commission, including at any point during the scoping period.