BEER WITH A SOCIALIST: Anchor Porter is delicious. Just don't expect a firm answer as to how it differs from Stout. 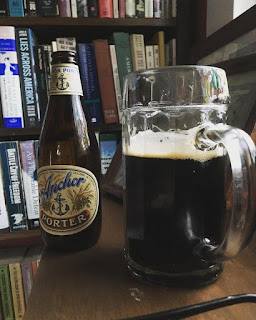 Last week I bought a six-pack of Anchor Porter in bottles -- for research purposes only, mind you.

It's been a while, and I regret this.

Anchor Porter is black and rich, firmly hopped (circa 40 IBUs) with plenty of malty underpinnings. I'm getting chocolate, espresso, toffee and a hint of licorice in my mouth, and I'm struck by a vestige of similarity with some Baltic-style Porters I've had in the past -- albeit at a gentler ABV.

Of course, your own experiences may vary. Try as we might to quantify flavors, we all taste life (and beer) slightly differently.

These days, Anchor Porter falls into a category of classification not unlike rock and roll bands of a certain generation. It's a heritage craft beer, or maybe a legacy craft beer. In the context of the American beer revival, any beer first brewed in 1972 -- when there were maybe 100 operational breweries in the United States -- might as well have originated in 1492.

At Pints&union, it is my aim to showcase excellent beers like Anchor Porter, which now find themselves crowed off shelves and taps by the tsunami of 6,000+ breweries seeking an outlet.

I'm going to try keeping Anchor Porter on tap all of the time, because if you like Porter (or, for that matter, the closely related Stouts), then you're going to like this one. I suspect that supply might prove to be more of a challenge than depletion.

As for the differences between Porter and Stout, it's one of the hardest beer questions to answer. Bob Brewer writes:

I’m reminded of the time some years ago when I discussed this very same topic with the late Michael Jackson. The beer guy Michael Jackson, that is. We were well into a lengthy sampling of rare single malts when the conversation came around to the stout / porter issue. I asked for a simple clarification of the stylistic difference because I considered it to be one of the more confused and ill-defined. Michael’s reply was that it was actually the MOST confused and ill-defined. He furthermore stated that even the best-researched and well-intended writings on the subject were “as unambiguous as a horoscope.” I took the master at his word and we ordered another round.


Ron Pattison's definition is far more detailed. He debunks the myths and discusses the practice of parti-gyling ("getting every last bit of goodness from the malt").

“What’s the difference between a porter and a stout?”

Roasted barley. That’s the usual explanation of what separates porter and stout. Unfortunately that story is total bollocks. The true tale is more complicated, more confusing and much more fun.

Let’s go back to their childhood. Eighteenth-century London with its elegant squares, gin and the birth of industrial-scale brewing. Something that could only have happened in London. Pre-powered transport moving large quantities of beer overland was impractical and expensive. London was the only city in the world with the critical mass of beer drinkers to power an industrial brewing reactor.

The story of porter—the first style to span the world—is one of technology, innovation and taxation. And war ...


Does this make it any easier? 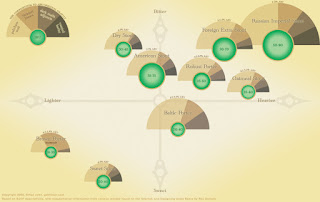 To me, Pints&union offers a chance to start over. We'll join together to drink Porters and Stouts, and then reach our own conclusions. The pub remains a couple of weeks away from opening, but until then, here's a pleasant, short video from Anchor about the brewery's Porter.

It makes me thirsty. As Jackson always said, the search for the perfect pint should last a lifetime.