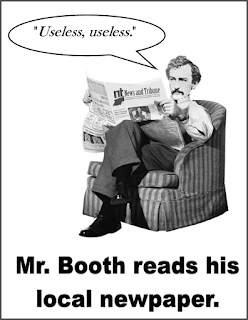 "Those civic watchdogs make a difference to the bottom line."

Hence my recurring point. As newspapers like the News and Tribune become forever more oriented toward human interest stories and whatever bells and whistles impel web clicks, local government coverage devolves into stenography.

Straight up: The News and Tribune abdicates its civic watchdog role more often than not.

But you're saying wait -- this CityLab article is about newspapers that shut down; we still have half a local newspaper in New Albany

Maybe half. More like one-fourth. When the Tribune and Evening News merged, the main office was established in Jeffersonville, and I believe it's a foregone conclusion that the center of gravity shifted east with it.

Take solace. The return of the newspaper's cooking school, some sort of pet adoption scheme or even a Chalupa Walk surely lies just around the corner.

The Hidden Costs of Losing Your City's Newspaper, by Kriston Capps (CityLab)

Without watchdogs, government costs go up, according to new research.

When local newspapers shut their doors, communities lose out. People and their stories can’t find coverage. Politicos take liberties when it’s nobody’s job to hold them accountable. What the public doesn’t know winds up hurting them. The city feels poorer, politically and culturally.

According to a new working paper, local news deserts lose out financially, too. Cities where newspapers closed up shop saw increases in government costs as a result of the lack of scrutiny over local deals, say researchers who tracked the decline of local news outlets between 1996 and 2015.

Disruptions in local news coverage are soon followed by higher long-term borrowing costs for cities. Costs for bonds can rise as much as 11 basis points after the closure of a local newspaper—a finding that can’t be attributed to other underlying economic conditions, the authors say. Those civic watchdogs make a difference to the bottom line ...