The "distracted pedestrian" is a myth, but distracted engineers and planners are another topic. 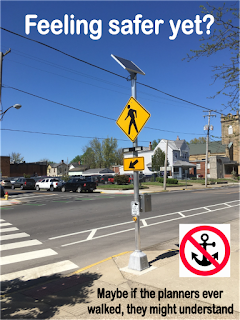 I intend to attend tomorrow morning's Bored of Works meeting, which Aebersold and Bob Caesar vowed to attend.

Why the ‘distracted pedestrian’ is a myth, by Alissa Walker (Curbed)

Most walkers are not texting when crossing streets, says a new study

Pedestrian deaths have hit a three-decade high in the U.S., prompting some cities to mount campaigns warning walkers to put down their phones and pay more attention. But some compelling new research reveals that pedestrians probably aren’t texting themselves to death.

While the term “distracted walking” has become a way to pin the blame on pedestrians for supposedly looking at their devices instead of the sidewalk, there hasn’t been much evidence provided to prove smartphone-using walkers are at fault when collisions occur. In fact, most states don’t even include pedestrian behavior as a factor in crash reports.

But a new study published by a group of Northern Arizona University engineering professors in Transportation Research Record looked at how 3,038 people used crosswalks in New York City and Flagstaff, Arizona, and concluded that a large majority of pedestrians—86.5 percent—did not exhibit “distracted” behavior ...