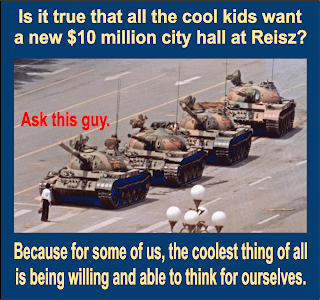 In my Thursday column, I reproduced a letter published in the newspaper, and in doing so I restored a paragraph that had been excised at the direction of the editor.

City hall’s relocation addresses Jeff Gahan’s pathological hatred of uni-gov. He’d secede from the county if allowed, and he’d relocate HQ to a suitably luxurious pole barn if one existed. Plainly, the aim is political preservation for Gahan and Democrats, and Reisz is just one move in a chess game to stave off power-sharing with the county.


I think the Reisz city hall maneuver has little to do with historic preservation apart from Gahan allowing David Barksdale and fellow preservationists to co-opt themselves, a fair amount to do with the imperial overlord reflection staring back at the mayor when he shaves each morning, and a great deal -- the biggest chunk of the entire machination -- about city-county relations in general and the police department in particular.

Last night when Lawyer Gibson began repeating the figure $9,000,000, saying it was how much money the city "has" in the jail, I think this was meant to convey a clue about Gahan's desire for the city to be indemnified by the county's "hospital money," as I believe Gibson referred to it -- in short, we'll secede from the county for all intents and purposes, and be paid to let the door hit us in the ass.

Gahan wants to make the split as irrevocable as humanly possible, tantamount to the division of Berlin after the wall was built, and since he has yet to perform a mayoral function in six years and six months without someone close to him being paid for it, it makes perfect sense to me that historical preservation and bogus economic development "ripple effect" promises aren't reason enough to spend $10,000,000.

Somehow, in a way as yet unfolding, he's spending your money to make his money, and what I like least about it is the rancorous tone being embraced by Gahan and his smug gang of self-satisfied sycophants.

Not one of Gahan's cliquish functionaries has a clue about indie business trends downtown, and how would they? After all, how many of the Team Gahan higher-up ever have been entrepreneurs or started their own businesses?

However, one thing cannot be denied: keep insulting county government long enough and at some point residents living outside city limits are going to conclude that these cheap shots are aimed at them.

We needn't turn to the IUS School of Corporate Hucksterism to know how important county residents are to the city in general, and for downtown in particular. They might choose to cross the Sherman Minton and head to Germantown or St. Matthews. We need them to stay on this side of the river.

Gahan's ill-tempered jihad -- Deaf's juvenile high school pep rally recitation of "us versus them" -- can only hurt the city's economy.

Of course, his crew of bootlickers is fond of commanding NA Confidential to shut up. Perhaps for the benefit of the business community, they might benefit from a stiff dose of their own advice.