One gorgeous afternoon at Fest of Ale. 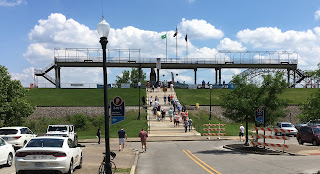 Someone I know came up to me yesterday at Fest Of Ale, looked around, and smiled broadly.

This wasn't the beer speaking. I'm not the most demonstrative individual, and yet there were a goodly number of vigorous "damned glad to see you" handshakes, and more than the usual hugs.

For a very long time, I existed in the minds of many people according to a particular frame of reference, this being the milieu of beer and the NABC businesses. There may have been a element in this of being typecast, stuck in the role I created for myself, although in truth it never bothered me much.

After all, somehow managing to be remunerated for drinking beer is a damned fine gig.

I've been out of it for three years. In the beginning, it was awkward on occasion, like after a divorce. Perhaps this is why I couldn't bring myself to attend Fest Of Ale during this period. The last time before yesterday was 2014 at St. Anthony's in Clarksville, with the NABC delegation.

Consequently, it was good to see so many folks I haven't seen in a while. On the one hand, outdoor beer festivals in summer haven't entirely reclaimed their allure for me. However, it helps a lot to be within walking distance, and the heat wasn't bad yesterday.

As someone who has attended dozens of beer fests, take my word for it: Fest of Ale gets it done the right way. This really is a signature locale event, perhaps smallish by national standards, but plenty big enough to offer numerous beer sampling options without sacrificing the intimacy of an annual "reunion." The vibe was positive, and the crowd well-behaved.