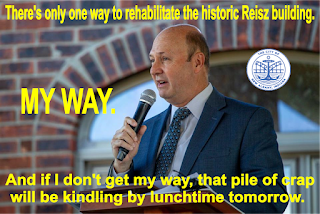 A white elephant is a possession which its owner cannot dispose of and whose cost, particularly that of maintenance, is out of proportion to its usefulness. In modern usage, it is an object, building project, scheme, business venture, facility, etc., considered expensive but without use or value.
--- Wikipedia

Since 2016, "disruption" is often used to describe Donald Trump's theory of governance. While feeding a steady diet of red meat to his core supporters, he seeks to overload the circuits toward a goal of disrupting "business (or politics) as usual," facilitating a renegotiation on his terms.

Politics in any size of pond is about power, and power is money, and so I submit that we're seeing a similar strategy of disruption in New Albany, as directed by Gahan. He intends to disrupt county government, but also New Albany's city council.

It doesn't require a PhD to see that since taking office, Gahan has seized every available opportunity to sever ties with county government. That's because Democrats are toast in the county, and at best, capable only of rearguard actions. To preserve the party's municipal system of patronage and keep the money flowing, the city power base must be fortified and walled off.

The best previous example of Gahan's instinct to secede came during his first term with an immediate (and wholly unannounced) move to split the joint parks department, inaugurating a spending spree and tripling the city's annual budgetary commitment to parks.

Of course, all those contractors and vendors donate to the mayor's campaign finance fund, don't they?

Now the time has arrived for Gahan to disrupt the arrangement by which city and county share an office building.

In due time (after I mow the damn lawn) the Green Mouse will be here to explain our theory that Gahan’s ultimate objective is to induce county government to indemnify the city to abandon its current home and move to the too-expensive-by-half Reisz Elephant.

Or, in more familiar terms: To preserve the Democratic governing clique's power, Gahan is building a wall -- and Mark Seabrook's going to pay for it.

Meanwhile, Gahan's disruption of city council became inevitable when 2018 dawned and Dan Coffey stood outside the tent, no longer under mayoral control. This meant that the potential of a Republican/Independent bloc had to be avoided immediately by detaching its weakest link, nominal Republican David Barksdale.

But Gahan's first steps toward council disruption came with the attempted kneecapping of council president Al Knable, a maneuver that seemingly failed. However, it's now clear that it was a feint, paving the way for the mayor to complete the process of isolating Barksdale from the potential opposing bloc.

As we speak, Barksdale's role in Reisz leaves him in danger of being drummed out of his chosen party. This helps Gahan municipal power consolidation, doesn't it?

We already know that Gahan's commitment to historic preservation exists only insofar as it increases his own city-versus-county power base, and by extension, as long as it bolsters his burgeoning campaign finance account. In short, Gahan doesn’t give a damn about old buildings -- and Barksdale is consumed by them. In effect, Gahan is tempting the alcoholic with a nice bottle of Kessler.

Situations like this always favor the ethics-free, self-interested cynic.

It's buildings over people, time and again, and people aren't the only entities capable of being held hostage. Last Thursday, corporate attorney Shane Gibson confirmed that we've arrived at a purely intentional ultimatum: either Reisz is rehabbed as the mayor prefers, or he'll be sure it is demolished without further discussion.

Not only has Barksdale facilitated his own captivity; now he's in Stockholm Syndrome territory.

Stockholm syndrome is a condition that causes hostages to develop a psychological alliance with their captors as a survival strategy during captivity.


Concurrently and unfortunately, by embracing a position of supine obedience to Dear Leader, Barksdale and other local historic preservationists are squandering their future credibility by allowing foundational principles to be merrily co-opted by the prerequisites of Gahan's squalid, grubby political sewer.

To conclude, our elders were astute.