Dragon King's Daughter's relocation to Market Street begins at the end of June. 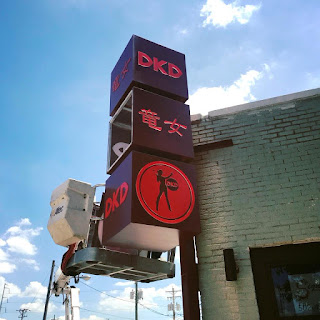 Yesterday, we learned of a forthcoming brief respite for Quills.

Public service announcement for fans of Quills, which will be closed for a few days for the alley move.

Next in line is Dragon King's Daughter, making the long-awaited move to 129 W. Market Street -- Gary Wolf's market, at least to some of us old-timers.

Of course, this means there'll be a space to fill at the corner of Elm and Bank. If you hear anything, let us know.

At some point between now and mid-July, we'll also be seeing at least three openings: Longboard's, Double Barrel and Pints&union. for more information, skip to here ...

... and take note that The Wright House Bar BQ seems already to have decamped to a different location in Clarksville.

Dragon King’s Daughter, currently at 202 E. Elm St (but facing Bank St) in New Albany, is undergoing some exciting changes. The Japanese restaurant has outgrown their current space and will be relocating to the corner of First and Market streets and changing up its menu with some new items. The new space will offer almost twice as much space and consist of a dining room, a semi-private dining area, and a bar/lounge for diners 21 and up who want a more grown up experience in a kid-free zone. The restaurant will be closed for one to two weeks as it makes this move, and June 28th is their last day of operations on E. Elm St. They hope to open the new location the following weekend, but interested parties should follow their Facebook  page or website for updates.

The restaurant will reopen with some new menu options, including the only robata grills in the region, according to General Manager Ryan Westphal. Robata is short for robatayaki, which means “fireside cooking,” and is a Japanese cuisine similar to barbecue that originated centuries ago when Japanese fishermen cooked around a communal hearth. In this style of cooking, vegetables and proteins (like seafood, beef, and chicken) are cooked over hot coals ...