Neighborhood inequality? On the placid street where Caesar lives, traffic must be moving too fast. Someone fetch a traffic engineer! 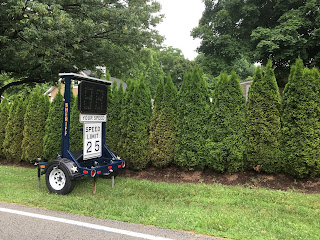 High atop Silver Hills, just a couple doors down from Bob Caesar's garage (where all the Bicentennial pot holders and koozies as yet are being stored), there's a radar speed display trailer marked "Sheriff," parked on Camp Avenue at the three-way stop with Knob Avenue 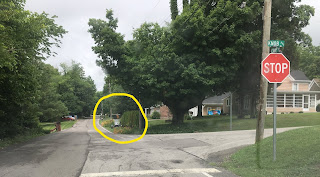 Al Knable mentioned the late Chloe Allen's name aloud, something that has eluded Jeff Gahan's snark clique during the two years following her death at the driver-privileged intersection in question.

Remembering Chloe Allen -- and the unfinished task of making streets safe for all users, not just drivers.


Aebersold and Caesar (!) resolved to attend next week's Bored of Works meeting to broach the topic of further street grid safety needs beyond city hall's premature declaration of victory. It's a start, and I'll try to attend to monitor the decibel level of BOW's snores.

Two weeks ago, hall of famer Jim Rice of HWC Engineering insisted to me that as walkers or cyclists, our own two eyes are never to be trusted if what they behold contradicts a professional engineer's tireless efforts to maintain speed and traffic flow through heavily populated areas.

In fairness, HWC only returned the street grid verdict it knew Gahan, the witless paymaster, wanted to hear. But any impartial observer can plainly see that problems remain on the flood plain.

Meanwhile, on the commanding heights, where traffic volumes are far less and stop signs profuse, someone has decided that enough's enough, hence the radar speed display trailer.

It remains unclear why it's there, which is the reason for this post, but the digital display is a reminder that someone -- sheriff, police or councilman -- is listening to driver-related complaints where the cool kids live.

The remainder of us would enjoy experiencing this on occasion. If city engineer Larry Summers is reading, he might begin by returning phone calls.
Posted by The New Albanian at 6/22/2018 08:25:00 AM