First, the renderings, then some of our trademark "hurtful" commentary. 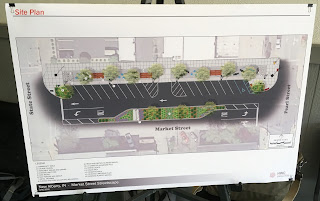 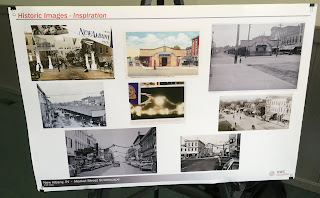 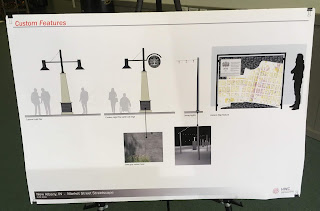 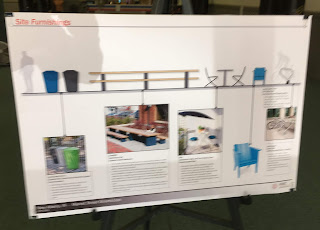 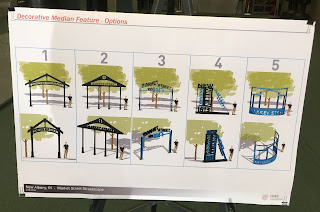 "Surprise, surprise, surprise," said redevelopment commission appointee Gomer Pyle when gazing upon favored city contractor (and frequent Jeff Gahan campaign donor) HWC Engineering's antiseptic and robotic pastel mock-ups of the latest in a series of shameless aesthetic abortions of urban design, this one pre-determined, pre-authorized and pre-monetized to grace Market Street between Pearl and State, but only the north side of the street.

Why only the north side?

Probably because whenever a New Albany city official pontificates about walkability, we've know what he or she really means is car-centric imperatives camouflaged by lofty rhetorical nonsense, and so recalling that city engineer Larry Summers originally referred to this beautification project's wonderful benefits for pedestrians, you'll see that the north sidewalk is halved and the unnecessary median (which should be dynamited) truncated to permit a westbound turn lane for drivers.

In turn, this means that once again -- have we reached 50 times yet, or 75? -- David "I'm Beaming About Buildings" Barksdale of the largely fictitious Treeless Board is merrily presiding over the felling of at least seven healthy trees, proving yet again that irony in New Albany is stone effing dead -- and moreover, with Barksdale the council swing voter of the moment, he's buffed to a high sheen by the City Hall patronage machine and encouraged time and again to lube the chain saw as a means of glorifying objects, as opposed to people.

Sadly, David Thrasher's Fork in the Road sculpture will not survive the signed, sealed and delivered Disneyfication of the block. There being no way for Gahan to take credit for a previous mayor's decision, he instead must intervene somehow, perhaps skulking masked at 3 a.m. to the installation and etching an anchor tattoo into the cheese.

The Gahan Monetary Arts Council proposes moving Fork in the Road to the northwest corner of the intersection at Market and Pearl, rendering it into a Fork in the Sidewalk, and revealing once more that the artistic sensibility of Team Gahan ranks right up there with field mice blind drunk on spontaneously fermented persimmon juice.

Following are some details. The sole debatable topic on the agenda yesterday was: "Which ironwork design for the fattened mid-block median is your preference?" Note that 1813 refers to the official (and incorrect) date of the city's founding, while 1817 is a nod to the inception of the city market, which used to stand in the middle of the street. 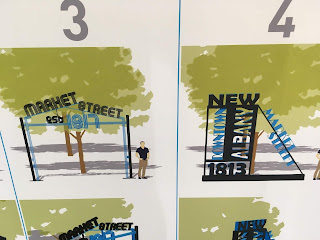 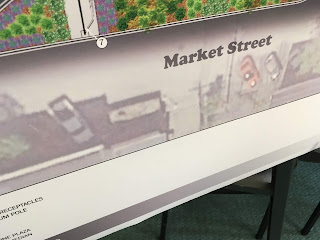 Below: (8) marks the spot of the Fork in the Rectum relocation. 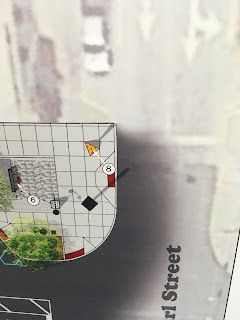 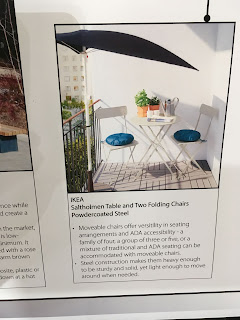 That's right: IKEA furniture ... with shadeless tables next to parking spaces by a street adding a traffic lane, all in the service of walkability. They're literally too stupid to be embarrassed by this farrago of power-play suburban white bread foolishness.

On Thursday morning at 11:30 a.m., I learned that the Redevelopment Commission had scheduled a public "input" session about the Market Street median enfluffment and beautification project, to be held at 1:30 p.m. at appointed commission member Terry Middleton's gym on the north side of Market, between Pearl and State.

I sincerely thank my informant, without whom I'd not have known the meeting was taking place. As it was revealed later, the full extent of "official" public notification about this meeting, as ostensibly aimed at gathering public "input" toward a foregone conclusion, was limited to those unfortunates in attendance at Develop New Albany's self-congratulatory midday luncheon at The Grand.

There's nothing new in any of this. We already knew that Team Gahan views the notion of open, honest transparency with the same reverence as a vampire views garlic -- and speaking of Transylvania, it's also understood that just as comrade Ceausescu sought to remake Bucharest in his own Mussolini-filtered image, Jeff Gahan is striving to render downtown's physical appearance into a tableau worthy of a veneer salesman's insipidity, with all the tasteful flair of an exurban outlet mall by the interstate.

As an aside, it should be noted that just last Thursday, at the conclusion of the city council meeting, I exercised my council speaking time to agree (!) with 3rd district councilman Greg Phipps, who earlier in the meeting had expressed interest in viewing the Market Street beautification proposals prior to their implementation.

Congratulating my councilman for this utterly atypical attention to detail, I added that there should be some way for the public to consider the hitherto guarded plan.

Councilman David Barksdale and redevelopment commission director Josh Staten were present and presumed awake, and heard me say this. Naturally, neither of them bothered to tell me about yesterday's meeting.

Perhaps they were in on the joke -- that the "input" meeting would come without any way of recording input aside from transmitting viewpoints orally to an HWC employee who didn't record them, but it matters little, given that as many as two, maybe even three members of the "public" were in attendance at a meeting few knew was occurring, otherwise lost amid the massed presence of City Hall's nepotistic, sycophantic governing clique, abetted by two of DNA's semi-professional grovelers and the duo of HWC operatives.

One of HWC's purveyors of drive-through expertise was in rare holier-than-thou form, but we'll return to baseball hall-of-famer Jim Rice's finger-wagging testimony -- which might be summarized as "engineers always rank higher on the food chain than nasty hurtful plebes" -- at another time.

As a postscript, the ever insightful Jeff Gillenwater inspires me to conduct a thorough analysis of spray paint options.

One day, someone much smarter than Gahan and his minions is going to tear down and paint over much of what they’ve done. I’m going to volunteer to help.