Experts say golf is dying, and if so, expect the redevelopment vultures to circle New Albany Springs. 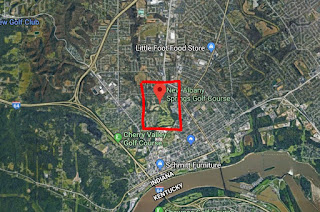 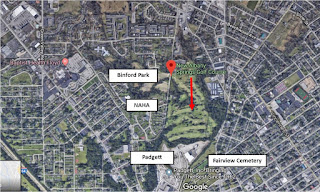 For as long as I can remember, during unguarded moments, certain of our city officials have been musing about the potential value and redevelopment potential of the area occupied by the New Albany Housing Authority's property on Bono Road.

They no longer speak with me, but I'm assuming this moistening of lips to have escalated since Jeff Gahan seized control of NAHA early in 2017.

Looking at the map, it's easy to see the military reasoning of these C-minus students, graded on the curve. NAHA is the high ground (topographically, though not morally in terms of Gahan's putsch), from which command of the battlefield is assured.

Just to the south, there's the expanse of Padgett. Some day, and I'm guessing sooner rather than later, someone at Padgett finally will do the math, begin negotiating with state agencies, score incentives and treasure chests, and move those cranes out of the city, into industrial space near an interstate, or River Ridge, probably both.

That's because Padgett is landlocked and can't grow where it is now, and the redevelopment potential (read: money) of its downtown property will become too great to ignore.

At this point, all we'll need to complete the scene is for the current New Albany Springs golf course property to become worth more as housing (alas, probably not as affordable as we'd like to see) than recreation, and the dominoes will fall.

Baptismal Hospital to "cleansed" NAHA land, down the hill to Binford Park and the golf course, continuing through the Padgett redevelopment bonanza, and all of it anchored by a cemetery that might as well be another park. It's the closest thing we're likely to have to the Clarksville South and future JeffBoat makeovers, and it's why the sycophants salivate.

And right there, in the middle of it, completely unchanged, with precisely the same long-necks and Democratic Party Walt Disney Film Nights, there'll be the Roadhouse, like a working museum.

Remember, the Green Mouse told you so.

As the sport’s popularity wanes, vast amounts of underutilized land will open up. Can it be developed?

Golf is dying, many experts say. According to one study by the golf industry group Pellucid Corp., the number of regular golfers fell from 30 to 20.9 million between 2002 and 2016. Ratings are down, equipment sales are lagging, and the number of rounds played annually has fallen.

Part of the bust can be blamed on the fallen fortunes of a single person: Tiger Woods. Golf boomed in the 1990s and early 2000s as the charismatic superstar raked in titles. Then, beginning in 2009, it faced a one-two punch of recession and bad press when its star golfer’s chronic infidelity came to light.

But the bigger story involves the sport’s aging demographics and the athletic tastes of Millennials, who just aren’t that into an expensive, poky sport that provides few health benefits. Unless the golf industry can change its ways, the decline will mean a lot of empty greens across the country. How that land is used—or isn’t—could reshape America’s suburbs for decades to come.

Golf courses and country clubs currently consume massive amounts of relatively underutilized land in cities and suburbs. Across the country, as courses and clubs begin shutting down, hundreds of thousands of acres of land could soon start opening up for infill redevelopment. While not so great for golfers, this could be a boon for cities, especially those facing a housing crunch ...

Golf is making a comeback. Tiger is making a comeback. But Many new youngsters have found new heroes as 5 of the last Titles have been won by someone younger than 26 years old. Real Athletes are finding Golf attractiive as their First sport and it makes the game better.
I had not played in 15 years as I gained weight after the birth of 4 kids and a messy divorce. My daughter and I went out for the first time ever together at New Albany Springs and we had fun. We saw several deer and other wildlife. Say NO to the vultures that look to replace these Parks with apartments or houses. This course is 99 years old, and I hope it makes to 199.