Got conscience? In terms of Gahan, Barksdale and the Reisz Elephant, the wants of the few outweigh the needs of the many. 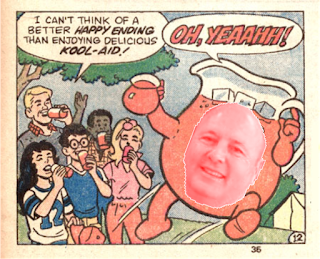 I was going to hold this until morning ... nah. I try to write well, and spend a lot of time on it, but tonight let's charge into it. Straight through, correct whatever mistakes I see with bleary eyes, and keep moving.

No one doubts that the current 3rd-floor City Hall struggles mightily with cramped and ancient office space in the decades-old city county building.

But have you ever heard a Gahan appointee admit error, even once?

To listen to Team Gahan relentlessly extol its own virtues, these past six and a half years have been a golden era of immaculate perfection.

As such, how can it be said that work space deficiencies have prevented Wile E. Gahan from effortlessly leaping from victory to victory?

We know better, of course, and it's just one of numerous circular arguments being deployed by the sycophants on behalf of a project of unfettered self-aggrandizement so brazen that there's really no parallel in the city's previous history.

With hard times all around, Jeff Gahan and David Barksdale are getting THEIRS, and they'e intent on getting it right now.

At a time when greater numbers of the city's residents than ever before are in need of assistance, Gahan's answer is to spend millions on himself. It's about the wants of the few versus the needs of the many, and displays hubris of such a high caliber that Donald Trump seems a meek and modest librarian by comparison.

Yet four Democrats and one Republican oblivious to daily life in this city somehow believe the best way to spend $10,000,000 million is on government's needs -- and meanwhile, Gahan continues to crow and strut about his masterpiece plan to displace public housing residents. He hasn't had the basic cojones to move forward with rental property inspections, and yet somehow, magically, voucher-ready apartments will soon be fruitfully multiplying.

Gahan ignores the consternation he's caused by annexing public housing. He can't bring himself to concede the existence of an affordable housing problem, or a homelessness problem, or a drug problem. In fact, he recoils from the very mention of human existence on his watch.

But a new city hall in a historically marginal warehouse? We definitely need to spend $10,000,000 on THAT.

As a longtime historic preservationist, Barksdale's probably incapable of a rational vote on this issue -- if he were being honest, he shouldn't vote at all -- but it's the four Democrats who amaze.

They pretend to adhere to a party platform that emphasizes fealty and commitment to the working man, but they see no contradictions in public housing demolitions accompanied by luxury government office boondoggles.

Not one of them grasps how the Reisz Elephant appears to the man and woman in the street, or can fathom that political behavior like theirs is what has put local Democrats in a position of sheer desperation with regard to holding power.

How is it that Democrats rationalize $10,000,000 for plush new offices when their constituents are suffering? Maybe grabbing as much as possible before the tsunami sweeps them into the gutter?

It defies logic. Unfortunately, it doesn't defy political patronage and blind loyalty to the Godfather -- and the money pours into Gahan's campaign coffers.

Readers, do me a small favor and remember this next year come election time. We'll have one, maybe two chances to restore values and integrity to city government. We simply cannot abide four more years of Democratic misrule -- and no, I don't prefer Republican.