NICK VAUGHN: RFK’s Legacy and What It Can Mean for New Albany.

RFK’s Legacy and What It Can Mean for New Albany

Kennedy’s visit on April 24th is the most well-known and also has the most information regarding the visit. As I was researching and putting my thoughts together for this remembrance piece, I was able to get into contact with the John F. Kennedy Presidential Library. The wonderful people there were able to supply me with photographs as well as a detailed schedule of RFK’s visit on April 24th, 1968.

"The schedule goes on to say: ‘The Senator should recognize in addition to the above three: Art Caulfield -- Dem. Treasurer of Central Committee; and John Wilcox -- Floyd County Chairman of Citizens for RFK. Judge Tegart will introduce the Senator.’

"Another copy of schedule says: '7:00 p.m. RFK speaks under auspices of Kennedy for President Committee of New Albany, at corner of Pearl and Market Streets.'

"Around 7:45 pm they left New Albany for Jeffersonville.”

Kennedy’s visit to New Albany on May 5th was much more brief, and the schedule of events has been lost. However, according to the RFK Human Rights Foundation Switzerland (which has been recounting RFK’s Presidential Campaign’s day-to-day activities) “It was an airport rally.” I am unsure of what airport that could have been at, however after the airport rally Kennedy embarked on a short car ride to Jeffersonville.

While the exact words Kennedy spoke in New Albany are not available in any format (yet!), we can make an educated guess about the kind of remarks he delivered in our Southern Indiana city.

Kennedy’s message was that of hope, togetherness, and peace. They're three things you’d be hard pressed to find in any campaign rhetoric today. In a speech delivered at Kansas University, Kennedy said, “And this is one of the great tasks of leadership for us, as individuals and citizens this year. But even if we act to erase material poverty, there is another greater task, it is to confront the poverty of satisfaction - purpose and dignity - that afflicts us all. Too much and for too long, we seemed to have surrendered personal excellence and community values in the mere accumulation of material things.”

In this speech he underscores what is good in America as well as the issues that face America. I, like he, believe we must face these issues together. I think our community would do good to heed the words of Bobby Kennedy. At a time when we see immense discontent and unfathomable amounts of poverty across the wealthiest nation in the world, and at a time when politics divides and solutions are fickle even at the most local levels of government, we should be seeing great voter turnout and community based action. 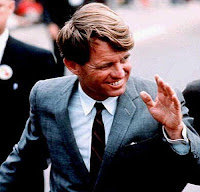 But voter apathy in New Albany may be at an all-time high, allowing those taking us on our current trajectory to keep their status quo. Like Bobby Kennedy did in 1968, we need to run against and as far away from our current trajectory as possible. In his Presidential Campaign Announcement, Kennedy said “I do not run for the Presidency merely oppose any man, but to propose new policies.” This is what we must do.

While it may be easy to feel frustrated, disillusioned, and discontented with our current trajectory, I urge you, like Bobby Kennedy urged Americans 50 years ago, to begin coming together. The only way we can begin to heal the wounds of society are with peace, love, and togetherness.

Additionally, we should remember and find a bit of pride in the fact that Bobby Kennedy visited New Albany, because that means he believed his message would resonate with us, and I believe that message still resonates today. 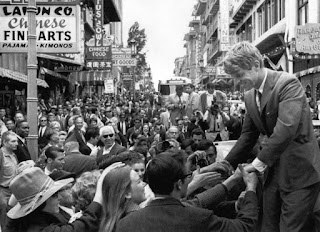 Finally, in the spirit of Bobby Kennedy, and to better remember what he stood for, I ask you to not have a moment of silence today on the 50th anniversary of his death, but instead to have a moment of action. And then another. Then another. Whether we agree politically or not, we need to change the motivations in our community and beyond to the broader land we call home. Remember, celebrate, act.

I know what I will be fighting for. Do you?

First off, I would like to thank the John F. Kennedy Presidential Library for their support via the detailed schedule and pictures (theirs unless otherwise marked).

For Your Further Interest: