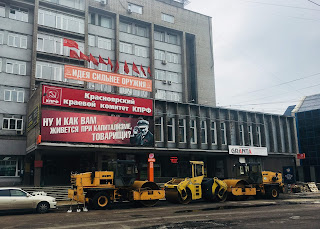 It's the headquarters of the Krasnoyarsk Regional Committee of the KPRF (Communist Party of the Russian Federation), in a photo taken by my old friend Allan.

What is Krasnoyarsk - Facts about the city, by Maria Mushtrieva

Krasnoyarsk is located 4065 kilometers from Moscow along the Trans-Siberian railway. It takes about 2 days and 10 hours to get there from Moscow by train and about 4.5 hours by plane. Krasnoyarsk is the center of the vast Krasnoyarsk region, it is the second biggest city in Siberia after Novosibirsk and a powerful industrial center. There are about 950,000 inhabitants.


The banner at the top reads: "Ideas are stronger than weapons." The center one bears the name of the regional Communist party.

At the bottom is the main point: "So, how is your life under capitalism, comrades?"

According to Wikipedia, it depends on what is meant by the word "capitalism."

Russia has an upper-middle income mixed economy with state ownership in strategic areas of the economy. Market reforms in the 1990s privatized much of Russian industry and agriculture, with notable exceptions to this privatization occurring in the energy and defense-related sectors.