BEER WITH A SOCIALIST: When Old Mister Lew tells a story, you're advised to listen closely. 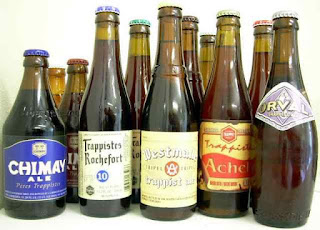 It's an American "craft" (microbrew?) history lesson from Professor Bryson, but don't panic. Think corrections, not catastrophe. The scene may seem to be in upheaval, but as Lew entertainingly points out, we've all been here before -- in the late 1990s.

As an aside, which may or may not be relevant to Lew's thoughts, I've finally started reading a book previously only skimmed: Michael Jackson's Great Beers of Belgium, first published around 1992.

My copy is the revised hardback edition from 2006, which was given to me as a gift. Jackson updated the text one last time in 2007, just before his death, and it came out in paperback form the following year. The book is wonderful, and Jackson's prose styling remains elegant and informative.

I miss his writing tremendously.

Whether good, bad or indifferent, the past few years for me have been a period of reckoning. Chronology afflicts me; so many deaths, so much change. Outside the walls of our house, where Diana and I constantly remind each other of how fortunate we are to be together and to live rich, loving lives, the chaos seems unceasing.

I'm a realist, and while circumstances differ, it's all happened before. When I look back on periods of my life that seem wonderful in retrospect, most of them were just as chaotic and uncertain as now. Perhaps one aspect was fantastic, and that's the part I've chosen to remember, and the way to keep the dissonance at bay.

There isn't one answer to a multiplicity of life's questions, but we can do as Lew advises -- and in his own unique voice, Jackson surely would have seconded -- by filling a glass, breathing deeply and embracing the narrative. Put down your phones, and have a conversation. Tell stories. Teach and be taught.

In a universal context, time's always running out for each one of us. The trick is to address those diminishing sands in the hourglass by slowing down, not speeding up.

THERE ARE REASONS FOR CONCERN, BUT THE SKY ISN’T FALLING, by Lew Bryson (All About Beer Magazine)

Breathe, brothers and sisters. Grab a can, fill a glass, take a seat at the bar … and breathe, while Old Mister Lew tells a story.