Community pillars have snagged THEIR city hall -- but you've found YOUR voice. Sharpen those pitchforks, and bring on 2019.


David Barksdale, who for 18 long months has avoided even the slightest public mention of numerous lives to be impacted by public housing demolitions, said working conditions in the City-County Building are "inhumane."

Bob Caesar credited Develop New Albany with revitalizing downtown New Albany during the 1990s -- not the YMCA, or riverfront development alcoholic beverage licenses, or the investments of entrepreneurs, contractors and small business owners.

Credit McLaughlin for one thing. At least he doesn't claim to be a high-powered intellectual.

And 5th district councilman Matt Nash voiced not even one solitary thought aloud, all night long, until uttering the word "yes" during the Reisz luxury city hall vote.

Perhaps we were right, and the new city hall really will be named after Warren V. Nash, Matt's father and Jeff Gahan's inexplicable Svengali.

Welcome to YOUR New Albany community pillars, four of them Democrats, and the other one now completely dead to us in any relevant political sense, as is the historical preservation contingent, whose future effectiveness now is tied to the person of Gahan, who deigned to attend the meeting, read a prepared statement, and rush off as quickly as he had arrived.

I'll never forget Greg Sekula's sophistry: from August 8, 2017, everything about the Reisz project was open and transparent -- conveniently ignoring the fact that months of bunker buffering prior to that infamous date were not visible at all.

This fix was lodged firmly in, and pretty much the entirety of Gahan's ruling clique was there to dance the jig over their forthcoming enhanced work abodes. The terminally self-interested spoke in favor of the Reisz, and regular folks against.

As the pillars cherish their names on those plaques, I see the vague outlines of the coalition that's going to flick the clique and topple Gahan's personality cult in 2019. My comrades in the resistance should take heart from last evening's political racketeering. Like fish bones in a dumpster in summer, the stench is rising, and all over town, voters are taking notice.

It becomes ever clearer that the opposition to Gahanism is driving the narrative, and it's only a matter of time until this narrative, presently a steadily expanding trickle into local mainstream consciousness, more closely resembles a torrent.

You're invited to help us begin exploring alternatives to the closed system of monetized political patronage that Gahan has constructed in New Albany. The same old suspects are incapable of conjuring fresh ideas, and Gahanism as a doctrine is completely exhausted.

It is sustained only by pay-to-play cash infusions from vendors and other contractors, who play the game as directed by Dear Leader and point mirrors at Team Gahan's minions in an endless cycle of preening selfies, and with the assistance of compromised collaborationists like Barksdale.

Problem is, we're all paying dearly for Gahan's Romper Room. It's flush and it's plush ... but just remember that it isn't impregnable. The enemy of our enemy is our friend, and we need to work together toward a common goal of removing the Reisz Five from the public teat.

Let's keep in touch, shall we?

NEW ALBANY — In a little more than a year, New Albany will have a new city hall.

The New Albany City Council voted 5-4 Monday night to enter into an agreement with Denton Floyd Real Estate Group to rehabilitate the old Reisz Furniture building and turn it into the new city hall. The city will pay $570,000 a year — out of Economic Development Income Tax funds — for 15 years, and in year 16 will take ownership of the building.

New Albany City Attorney Shane Gibson said the cost to restore and turn the dilapidated building into city hall will be $5.6 million ...

... The vote was a carbon copy of the first two taken on the ordinance. Dave Barksdale, Bob Caesar, Greg Phipps, Matt Nash and Pat McLaughlin voted in favor of the proposal while Dan Coffey, Scott Blair, Dave Aebersold and Al Knable voted against. 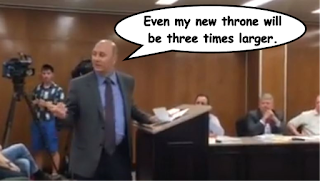